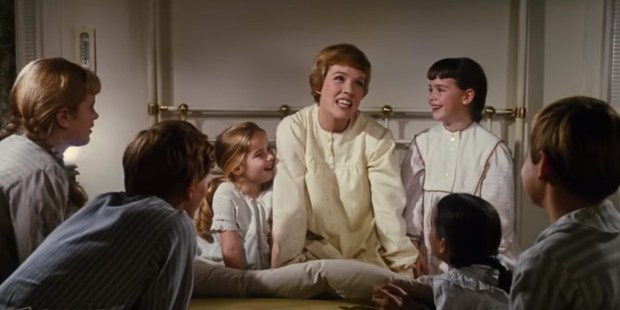 Instead of simply dipping into a trough of sentiment this Christmas, dive into a sea of meaningful, faith-based tradition.

All over America, families watch The Sound of Music as a Christmas tradition. At first glance, this seems a little odd, since the film does not contain a single Christmas scene. But, somehow, Maria and the whole von Trapp family elicit a love for all things traditional and family – and what says family tradition better than Christmas?

If you’ve ever wondered what became of the von Trapps after they climbed every mountain in the Alps, setting them alive with the sound of music, to escape Nazi occupied Austria, you can read all about their adventures in Maria’s book, The Story of the Trapp Family Singers. They came to America! They had become a talented family choir in Austria and their agent booked an American tour that enabled them to leave their occupied homeland and take refuge in the US. Most of their time in the first few years was spent on a big blue bus, traveling the country, singing the beautiful classical and traditional songs that comprised their repertoire. They had record albums and theirs was a household name in America even before the musical came out.

Maria was as effervescent and fun as Rogers and Hammerstein’s character suggests. She observed and collected some of the traditions she learned in their new home from people they met along their journeys, but most of all, she sought to keep her large family (she and the Captain had three more children together) grounded in their Catholic faith through the traditions as they practiced them in Austria. Maria shared these traditions with the world in her 1955 book, Around the Year with the von Trapp Family and I am happy to announce that it is finally back in print!

In it, you find lovely old-world practices to live out the liturgical year in the Austrian way, just as Maria and the Captain did with their family. The von Trapp family’s Christmas celebrations centered around the birth of Christ. Advent was spent preparing their hearts for the Christ child to enter in and to contemplate His second coming in the future.

Although Advent will soon be giving way to the great feast of Christmas, it’s not too late to add depth and meaning to your family’s celebrations. Even if you have a different cultural background, Maria von Trapp’s traditions will inspire you to go beyond our modern way of celebrating, which mainly consists of dipping into a trough of sentiment, and dive instead into a sea of meaningful, faith-based tradition. You can spend your Christmas season welcoming the Christ into your hearts and home in many of the ways they did.

Rather than rushing around doing last-minute shopping on this holy day, spend a day of quiet preparation in your home. The von Trapp parents transformed their living room into “the Christmas room,” decorating the tree and arranging the gifts each person delivered secretly throughout the day. “There is a certain hush all through the house,” Writes Maria. “People are tip-toeing and whispering; at the same time there is an atmosphere of extreme activity. Mother and father spend the day behind the closed doors, ‘helping the Christ Child.'” They spent the rest of the afternoon tidying every corner of the house.

Greet the feast with prayer

Whether you attend Mass at an early “family Mass” at your parish, midnight Mass, or one on Christmas morning, the Church celebrates the birth of Christ in the wee hours between the 24th and the 25th. The von Trapps attended three Masses for Christmas! Traditionally, the Mass at Midnight is the “Angels’ Mass,” dawn is the “Shepherd’s Mass” and a Solemn High Mass takes place at broad daylight. You probably only attend one, but you can pause to pray as a family at these times – maybe praying a family Rosary, or an appropriate hymn sung solemnly – to acknowledge the different aspects of this great feast of the Incarnation of God as all heaven and earth rejoiced.

Feast with food and song

Both food and song are essential to a proper feast and Maria shares her favorite recipes, as well as the music to join them in song. You might learn a few new songs to sing before and after Mass as you gather with your own family, both on Christmas Eve and Christmas Day. Singing with your loved ones is more intimate and personal than simply playing a Christmas CD in the background – and becomes an act of prayer. As St. Augustine said, “He who sings, prays twice.” A special, simple or festive meal for Christmas Eve helps begin the feast, as do snacks and cookies made only at Christmas.

Observe the 12 Days of Christmas

It’s harder to keep the Christmas feast through the 12 days, let alone until it officially ends February 2 with Candlemas (also known as the feast of the Presentation), in a country that is not thoroughly Catholic like Austria was. Your tree will have become a fire hazard before then. But, you can keep your Nativity set up near where you gather for your family prayers. And there are many feast days you can incorporate into your family schedule. On the feast of St. John the Apostle (December 27), there is a special toast to “Drink to you the love of St. John.” The other person responds, “I thank you for the love of St. John,” and turns to offer the toast to the next person. New Year’s Eve is spent looking back to thank God for the past year and then welcoming the new year with merry-making. Maria again includes games, recipes and songs enjoyed by her family.

End the 12 Days with a bang

The 12 Days of Christmas are followed by another huge feast — Epiphany. In many countries, this it is called “Three Kings Day,” for that is what it celebrates, and this is when presents are given. This is a day for another party and for blessing your home in the old way: The family should be able to obtain some blessed chalk from their parish (this is very common now) and mark above all the exterior doors in this manner: 20 C M B 19. This stands for the year and the initials of the three Magi (Caspar, Melchior, and Balthasar). You can also walk through your home blessing each room with holy water and incense.

These are some traditions from Austria and the ancient Church and you can look for more from your own cultural background. When you learn how people of other lands and times have celebrated the feasts of the Church year, you may be inspired to incorporate some of them into your own traditions. In addition to helping to live the spiritual side of Christmas, you will come to see the universal character of our beautiful Faith.

Read more:
How Do You Solve a (Liturgical) Problem Like Maria?