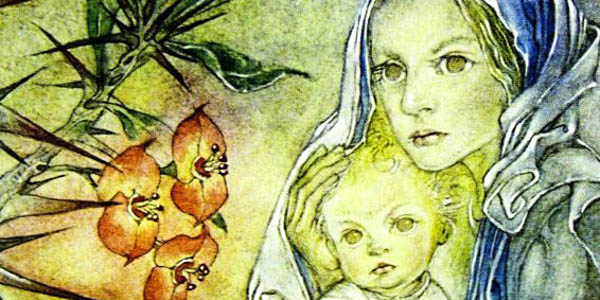 It’s the most Marian time of the year. In December, all eyes are on the Lady of Nazareth as she makes her journey to the village whose name would echo through history. Christians the world over ponder the discomfort of her travels, the uncertainty of seeking a place to stay, the wonder she felt on holding her son, and the glory as angels sang praise to God.

In churches that hold no statues the rest of the year, there are statues now, of Mary and Joseph and shepherds and wise men and animals galore. In communities where the name of Mary is hardly ever mentioned, voices are raised in song about Virgin Mother and Child. And millions of parents are throwing together slapdash costumes as millions of children rehearse lines for Christmas pageants. The starring role? Mary. Jesus will be played by a baby doll, likely as not, and Joseph will stand quietly to the side as the play reaches its climax, the spotlight fixed on Mary as she gazes at the Christ child.

Why this focus on Mary at Christmas, especially among the billion Christians who avoid her the rest of the year?

Because we who love the Son want desperately to be Mary at Christmas. We want to hold him close, to gaze into his eyes already so full of wisdom. We want to worship, as every mother is tempted to worship her newborn baby and only one truly could. We want that moment of silence in the stable that had become a cathedral, those deep breaths smelling his sweet baby smell as we cling to him in joy and wonder and fear and trembling and adoration.

We don’t want the prophecy of Simeon or the flight into Egypt. We don’t want to lose him in the Temple or worry about his future. We don’t want to bid him farewell at Cana, to follow at a distance, to watch him crucified or hold his corpse. We want Christmas and we want to stay there.

But Mary knew that Christmas held the promise of the Cross. She wrapped him in swaddling clothes as Joseph of Arimathea would wrap him for burial. She laid him in a feed trough, the spotless Lamb who would be sacrificed and offered to us as food. She held him close, knowing that he was born to die.

On Christmas, God became needy so that those shepherds and tax collectors and millennial students and weary day laborers who were reluctant to approach him in his majesty would come near in his infancy. We look to Mary at Christmas because we want to take her place, gazing at the one we love in peace.

And so we should. Without the wonder of Christmas, we may not have the strength for Calvary. And Calvary will come in all our lives. So alongside Mary, we spend Christmas soaking up peace and joy and glory to be strengthened for what is to come. We can’t forget the poverty and fear and rejection that attended that birth, as she and silent St. Joseph made do with the stable far from family and friends, but neither can we forget the poverty and fear and rejection we experience in our lives. Still, when she held him in her arms, it was enough. May it be enough for us. May he be enough for us.

As we finally begin the Christmas season this week, let’s unite our hearts to Mary’s, asking her to hand her infant son to us so that we, too, might gaze upon God made weak for us. Like her, let’s fix our eyes on Jesus. Let’s allow his peace to transform our anxious and weary hearts.

Starting on Monday evening and all throughout the Christmas season, let’s sit in the stable, delighting in our newborn Savior so that we can take up our own crosses once more when the time comes to move on from Bethlehem and walk toward Calvary.

Read more:
St. Luke got the greatest interview of all time