Why all parents should let their kids experience Midnight Mass 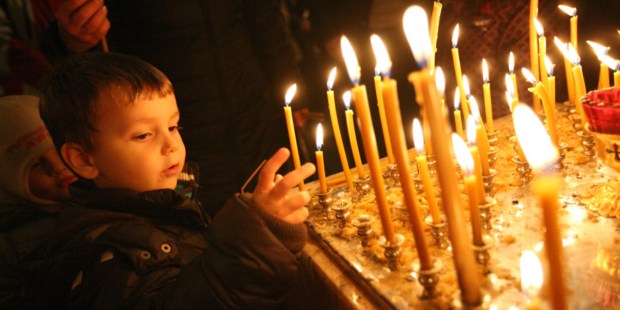 As if you needed another reason to skip the crowds at the 6 p.m. vigil, here’s why Midnight Mass is worth the effort.

At midnight on Christmas Eve, you can sometimes see your breath hang in the air like crystals. If the sky is clear, a Mass-goer might pause for a moment to see the stars prodigally thrown across the sky like so many saints looking down on the world. They twinkle like candles in the window of the heavenly mansion. On Christmas Eve the atmosphere is charged with a rare sense of aliveness, as if on this night the entire world is enchanted and creation strains in anticipation. If the Savior of the universe can be born under a sky such as this, who knows what other miracles are possible in my life or yours?

Yes, there are drawbacks to midnight Mass. The night is cold and the car may groan and resist being put into use. If you’ve been blessed with a white Christmas, once inside the church the floor around your pew may quickly become damp with melted snow from winter wellies and discarded scarves heavy with moisture. You may feel the lateness of the hour in the tiredness creeping in around your eyes, although seeing the elderly lady in the pew in front of you soldiering through what’s probably her 90th midnight Mass in a row may be the heroic example you need. If you have young children in tow, after the final blessing you’ll soon be carrying their sleep-slack bodies to the car to buckle them into their seats while their heads wobble with dreams of Christmas morning. In spite of any drawbacks, all of the effort is worth it.

Even the inconveniences of midnight Mass create nostalgia and become, in their own way, sweet memories, such as those who as adults fondly recall falling asleep in the pews when they were kids. On a normal Sunday morning at Mass, a parent would be horrified to find a child sprawled out on a pew with a hymnal as a pillow, but at midnight nothing is quite normal, and all of the sudden it’s charming.

Typical standards of behavior are erased, and in a way, this exception to parental expectations reveals how special this night is, because it is through the eyes of children that the secrets of faith are revealed. These peaceful sleeping babes have made themselves at home in the house of God. They know implicitly that on Christmas God makes His home with us. He has joined our human family and as a growing child has learned to love His mother and father.

The Christ child has a birth story for the ages, but in every other way he shares the commonality that all human beings enter the world in the same manner. He was born to a mother, and on Christmas Eve as we enter into the womb of the church at midnight Mass, we are reminded that He shares His mother with us. Perhaps on that first Christmas Eve night, the infant Jesus too lay down on His mother’s breast and slept while Joseph kept watch. The children sleeping in the pews at midnight Mass rest in Mary’s arms, too.

Years ago, before I became Catholic, I heard about their funny habit of staying awake and attending midnight Mass. I was intrigued by the mystery of why seemingly sensible people would choose to go to so much inconvenience instead of attending church earlier in the day. Out of curiosity, I stayed up late and went. This was the first Mass I went to as an adult. The memory lingers. At that midnight Mass, the incense soaked into my skin and became a part of me, forever cementing the emotions that came with that night, a physical reminder that, even if we enter the Mass as strangers, we are all intimately connected to each other through prayer. On Christmas, God comes not for a select few but to reveal His love to the whole world.

The chance to return this love is the reason so many crowd into the church. Who knows how God touches each individual soul, but for me, it’s enough to simply be in the presence of a love so strong that it exerts a gravitational pull on shepherds and kings alike. The feeling of being awake and praying while the rest of the world is asleep is a loosely kept secret shared by those who have journeyed to what is essentially a living manger scene. These are people who have heard the angels exulting and made haste to discover the reason why. Inside is light and candles and warmth, outside is cold and snow. Midnight Mass draws us to our spiritual home and is the perfect way to wait through the night and allow Christmas day to reveal itself.

There are times for all of us when life isn’t going well and even holidays can be stressful, or we find ourselves in a dark place spiritually, or simply struggle to make it through each day. Midnight Mass is a light in the dark, a beacon of hope that there is a love so strong that even in our darkest moments God is with us. And so, like shepherds bundled up against the chill of the fields, we arrive as pilgrims to an unknown destination. Whatever it is a person thinks will be found at midnight Mass, we know that we will find the God who has made His home in each of our hearts.