From looking up to bowing down: This is the recipe to finding God’s presence 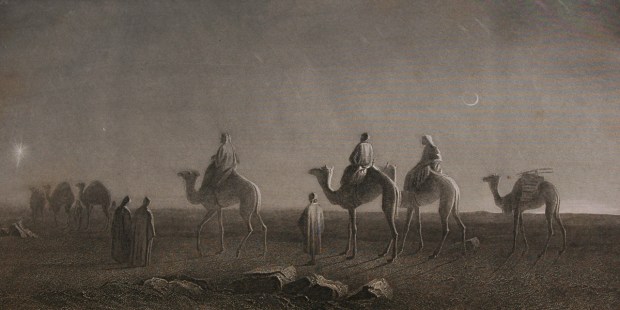 Intensely attentive to their surroundings, both the magi and the shepherds follow the same path.

Those who first learn about the birth of Jesus are the ones who give us the perfect recipe for how to place ourselves in God’s presence as they did.

Matthew’s Gospel speaks of the magi arriving in Jerusalem with a question, “Where is the newborn king of the Jews?” (Mt 2:2). Not, “Is there a new king?” or “Do you think there’s a new king?” The magi know that he has arrived and now they wish to pay him homage.

On a practical level, these are men who constantly have their heads tilted towards the sky. The “sky” or the “heavens” is the place of highest importance for Matthew. He refers to the message of Jesus’ preaching not as “The Kingdom of God,” but as the “The Kingdom of Heaven.” When we hear Matthew speaking about the “heavens” or the “sky” we should hear him referring to Yahweh. Thus, in looking to the sky, the magi were looking to him, and to him alone.

Then we have the shepherds who are “keeping the night watch over their flock” (Lk 2:8). Shepherds are a curious group of people to receive the message of this Newborn King. In contrast to the magi, who deduce the coming of the Messiah by their own workings, these simple shepherds are given the news with an announcement. The shepherds seem to be minding their own business until God’s intervention with a choir of angels.

However, if we look more closely, the parallel with the magi is clear.

The shepherds were in the midst of their “night watch.” Night time was dangerous not only for the flock but for the shepherds themselves. Anything could happen at night. There were no street lamps or flashlights for the shepherds to use as an aid. The darkness would have been deep and it would have been extremely difficult to protect the flock from an attack by predators or thieves. Hence, these men are keeping watch, as they had to every night. The shepherds are intensely attentive to their surroundings, and it is within this attentiveness that they receive the message of the angels.

They had no distractions like we do today. It was simply them, their shepherd buddies, their flock, and God.

The shepherds and the magi both arrive after the birth of Christ. The first thing the magi do: “They prostrated themselves and did him homage” (Mt 2:11).

The position of prostration in the Bible is only used when human beings are before God in worship. There are numerous occasions when this occurs: Abram falls on his face when God speaks to him (Gen 17:3), Moses and Aaron fall on their faces before the Lord in the meeting tent (Num 20:6), David and the people bow down low before God (1 Chr 29:20), and finally a leper sees Jesus, instantly falls on his face before him and begs the Lord to make him clean (Lk 5:12).

The first and only proper response to coming in contact with God is to fall on our faces before him in adoration. It is only from that position that we are able to focus on what is truly before us.

Two vastly different groups of people give us the same lesson on Christmas: Keep our attention focused upward, attentive to God, and when we’ve found Him, bow down in adoration. And never leave his side.