Why do we wish people a “merry” Christmas? 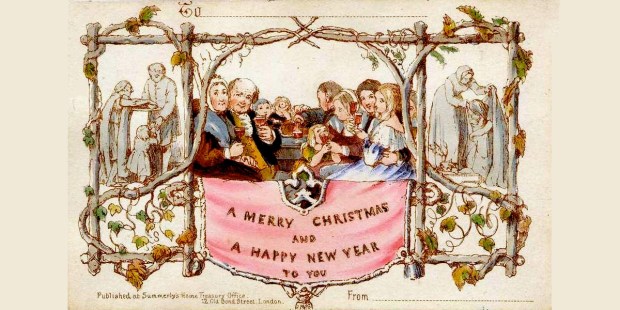 A look at the history behind this turn of phrase.

All across America it is quite common to offer season’s greetings with a hearty “Merry Christmas,” or perhaps a “Happy Holidays” if you’re in a department store. So how did it come to be that holidays are merely happy, but Christmas is supposed to be merry?

The phrase “Merry Christmas” can be traced back several hundred years, to the 16th century. The earliest known reference to the greeting is found in the letters of an English Catholic bishop, John Fisher, who wrote in his correspondence to Thomas Cromwell:

“And this our Lord God send you a merry Christmas, and a comfortable, to your heart’s desire.”

In the same time period, the carol “God Rest Ye Merry, Gentlemen” was written, although it was not published in the modern form until the 18th century. In those days the English language looked very different and the line “rest ye merry” did not mean to relax and be happy.

The word “rest” meant “to keep, cause to continue to remain,” and merry could mean happy, but also “bountiful” and “prosperous”. WhyChristmas points out that the opening line could also be translated to, “[May] God keep you and continue to make you successful and prosperous, Gentlemen.” This definition of “merry” makes sense in regards to the Nativity, which brought great prosperity to the world through it’s salvation.

It should be noted that the comma should always come after the word “merry” in the carol, as it would change the meaning if it were placed before. With the comma after “merry” is saying, “God keep you prosperous, gentlemen,” but when it comes before it looks more like, “God keep you, prosperous gentlemen.” It is a common mistake to misplace the comma, which may explain where “Merry Christmas” came from, since it’s only a little jump from “Merry Gentlemen” to the seasonal greeting.

There were two sources in the 19th century which helped popularize “Merry Christmas,” both of which come from 1843. One was the very first Christmas card, sent by Sir Henry Cole, with the words “A Merry Christmas and a Happy New Year to You”.

The very same year Charles Dickens published A Christmas Carol, in which the phrase “Merry Christmas” appears 21 times. Dickens also quoted “God Rest Ye Merry, Gentlemen,” however he changed it to, “God bless you, merry gentleman! May nothing you dismay!” Note he moved the comma.

It would appear that the phrase developed over several hundred years. What we find to be a greater mystery than where the greeting came from is that it is no longer what people say in the UK, where they tend to wish each other a “Happy Christmas.” The term was developed in England and cemented into the vernacular by arguably the greatest English author of the 19th century, so how did it fall out of fashion in its country of origin?

From a writer’s perspective, it would be best not to say “Happy Christmas and a Happy New year” because the repetition makes the phrase seem lazy and feel dull. Adding a unique descriptive term, one which we only tend to use for Christmas, gives it a certain special feeling and helps get us in gear for the Christmas season.