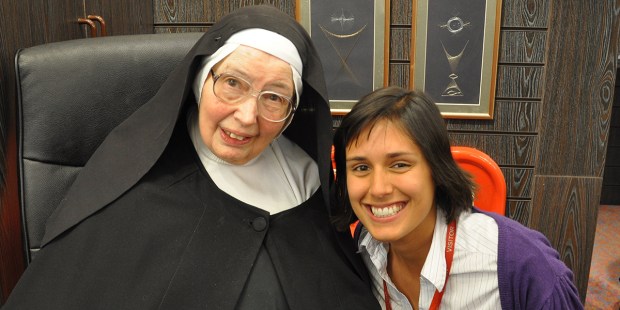 The Carmelite nun became an unlikely TV star in the 90s

Sister Wendy Beckett, a Catholic nun who left the cloistered life of a monastery in England to become the host of a popular television show on art history, died today at the age of 88.

The host of three BBC television series on art history, which the New York Times called “the most successful BBC arts programs since ‘Civilisation,’”Sister Wendy was also the author of 15 books on art and religion. She had received permission to study art in the 1980s and wrote her first book in order to earn some money for her convent.

Her unlikely celebrity status came about, when at the age of 61, while living as a hermit in a trailer on the grounds of the Carmelite Monastery in East Anglia, the Oxford-educated nun was asked to host a documentary about Britain’s National Gallery.

The show was a hit, reports the New York Times, and was soon followed by the six-part “Sister Wendy’s Odyssey,” which covered museums across England and Scotland, and drew more than 35 million viewers.

Sister Wendy went on to host a 10-part BBC series in 1994, “Sister Wendy’s Grand Tour,” in which she introduced viewers to the treasures of the great museums of Europe. In 1996, “Sister Wendy’s Story of Painting,” took her through Europe, the Middle East and the United States.

BBC director of arts Jonty Claypole recalled that Sister Wendy had “a unique presentation style, a deep knowledge of and passion for the arts,” reported the BBC.

“She was a hugely popular BBC presenter and will be fondly remembered by us all,” he added.

Born in Johannesburg, South Africa on February 25, 1930, Sister Wendy joined the Sisters of Notre Dame de Namur at age 16. She studied literature at Oxford University while living in a convent and observing a code of silence for the four years she studied in England. She graduated with high honors as the recipient of a Congratulatory First Class degree in English literature.

After returning to South Africa, she taught for 15 years at a convent and later was a lecturer at Johannesburg’s University of Witwaterstrand. In 1970 she returned to England to pursue a life of solitude and prayer after being diagnosed with epilepsy.

Here is an episode of “Sister Wendy’s Story of Painting,” in which she discusses the sacred art of the Italian painter Giotto.