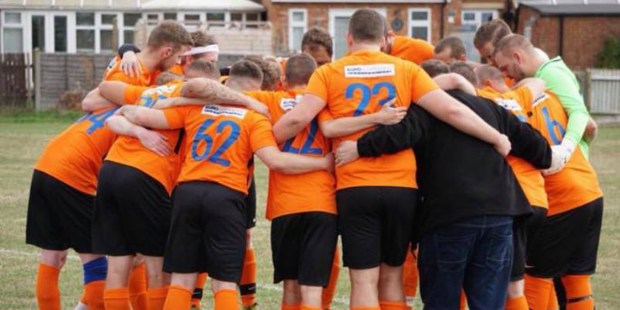 The team highlights the need for dads who’ve gone through child loss to share their experiences.

When keen amateur soccer player Rob Allen lost his daughter Niamh just four days before her due date, he was left feeling like he “didn’t have the right headspace” to return to the soccer field. The manager of his team, Eastern Eagles, reached out to him and suggested the club play a match to support Sands — a British charity for stillborn and neonatal deaths. Spurred on by a cause so close to his heart, Allen gathered other men who’d been through the same situation to create the team Sands United.

Now, one year later, this 30-strong team of men who’ve all experienced the loss of a child themselves or in their close family have won the prestigious Pride of Sports Award that recognizes the “unsung heroes of grassroots sports.” Yet Allen’s focus is not on impressive awards. Instead, he’s aiming to encourage other bereaved dads to create similar teams throughout the country.

Allen is quick to point out that while the team focuses on soccer, it also offers much needed support for men grieving the death of their children. Their Whatsapp group is a means of reaching out for help: “You can jump straight in and say, ‘Lads, this just happened. I’m sitting in my car and I’m halfway between crying my eyes out and bashing my car window in,'” Allen explained to Radio 1 Newsbeat.

One grieving dad, Oliver Earby, points out that men don’t readily open up about their emotions. Once they’re aware that others have gone through the same experience, it makes it easier to talk about their own pain and suffering. This team recognizes that bereaved dads need support and that it can come in a positive manner — even if their soccer skills aren’t yet championship worthy. As Allen said: “Without the team and without the guys, what would those people be doing? If you were on your own and you didn’t have that opportunity, your brain can be a dangerous place.”

Read more:
What’s the right way to answer “How many children do you have?” when you’ve miscarried?