The first of the King’s entourage: The Comites Christi have entered the Court 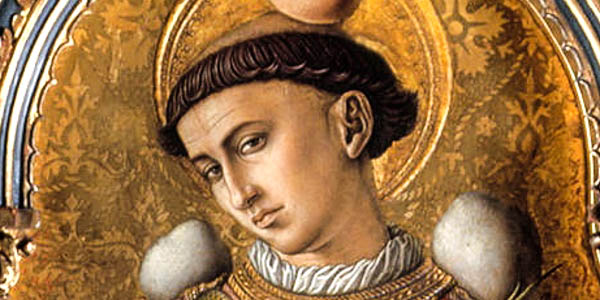 The series of feast days we start today invites us to reflect on the fullness of the Paschal Mystery, not just the charm of carols and candlelight

Stephen, filled with the Holy Spirit,
looked up intently to heaven
and saw the glory of God and Jesus standing at the right hand of God,
and he said,
“Behold, I see the heavens opened and the Son of Man
standing at the right hand of God.”
But they cried out in a loud voice, covered their ears,
and rushed upon him together.
They threw him out of the city, and began to stone him.
The witnesses laid down their cloaks
at the feet of a young man named Saul.
As they were stoning Stephen, he called out
“Lord Jesus, receive my spirit.” —Acts 7:54-59, from the First Reading for the Feast of Saint Stephen

The oldest liturgical calendars include a series of saints’ feasts immediately following the celebration of Christmas. Medieval people saw these saints as a sort of cortege of honor for the new-born King, calling them the Comites Christi (“Companions of Christ”). Those honored on these days, St. Stephen (December 26), St. John the Evangelist (December 27), and the Holy Innocents (December 28), help us to reflect not only on Who it is who has been born. But these feasts—particularly the chants and readings of the Mass and Liturgy of the Hours—also invite us to reflect on the fullness of the Paschal Mystery, recalling the Death and Resurrection of Christ and the experience of suffering endured by the first Christians.

St. Stephen was one of the Church’s first seven deacons. A man “full of grace and fortitude,” he worked great wonders and signs among the people (see Acts 6:8). Accused of blasphemy against Moses and against God, he was condemned by the Sanhedrin, the Jewish high court, to be cast out of the city and stoned to death. Kneeling before his murderers, he cried out with a loud voice; “Behold, I see the heavens open, and the Son of Man standing at the right hand of God.”

Stephen was martyred around the year 34. He is among the Church’s most celebrated saints and is honored as the patron of deacons and of stonemasons.

While today’s liturgical celebration of St. Stephen, with its red vestments and themes of martyrdom, stands in stark contrast to yesterday’s celebrations of Jesus’ birth, it also calls to mind the reality of the Cross in the life of the Savior and in the lives of those who follow Christ. That is why we hear in the Gospel for today’s feast, “You will be hated by all because of my name, but whoever endures to the end will be saved.”

As we celebrate the Octave of Christmas and today’s feast of St. Stephen, we recall that the Incarnation brought the gift of love to humanity, a love that enables us to share in the Lord’s Divinity. The prayers offered by the Church today testify that Stephen was a model of this love and a fearless witness to that Faith:

Grant, Lord, we pray,
that we may imitate what we worship,
and so learn to love even our enemies,
for we celebrate the heavenly birthday
of a man who knew how to pray even for his persecutors. (from The Liturgy of the Hours)

Why is it so important to reflect on the Cross in these Christmas Days?

How do the reading and prayers for the Feast of Saint Stephen enrich your celebration of Christmas?

How can you more fully live in the gift of the Savior’s love in these holy days?

Words of Wisdom: “The love that brought Christ from heaven to earth raised Stephen from earth to heaven; shown first in the King, it later shone forth in His soldier. Love was Stephen’s weapon by which he gained every battle, and so won the crown.”—St. Fulgentius of Ruspe

Read more:
Christian persecution on the rise as 7 are martyred in Egypt