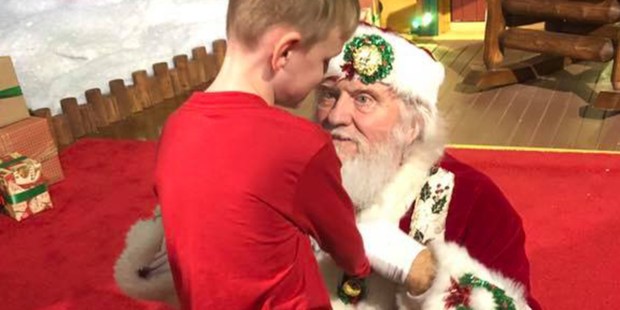 A 6-year-old’s Christmas wish was answered.

Six-year-old Matthew Foster loves everything about Santa Claus. He even memorized the entirety of “Twas the Night Before Christmas.” So when his mother, Misty Wolf, took him for his first visit to Santa, he was more than excited.

His mother whispered to Santa, “He is blind and autistic and is very interested in Santa.” And Santa replied, “Say no more.”

The man playing Santa gave Matthew as much time as he needed, allowing him to touch his face and to pet the reindeer in the display area. Wolf dubbed him the “Best Santa Ever!” for the grace with which he interacted with her son.

In an article on Love What Matters, Wolf explained, “Matthew spent 111 days in the NICU. There he developed stage 5 ROP due to the amount of oxygen he was given to survive. His brain scans told the doctors that Matthew would never walk or talk. But God had other plans.”

By taking time to be fully present to Matthew and to connect with him in a very personal way, this Santa has shown what it means to treat each other with the dignity and respect owed to every human being no matter their age, size, or ability.