Why is the day after Christmas called Boxing Day? 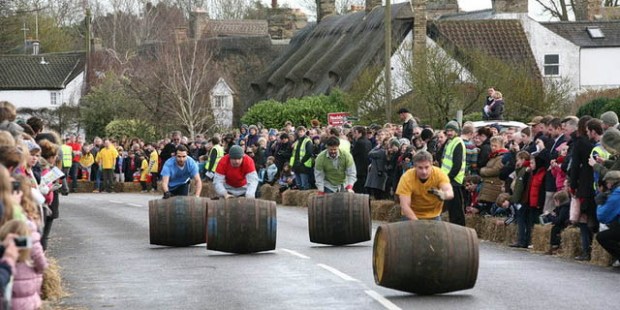 The English holiday has evolved into a version of Black Friday, the biggest shopping day of the year.

It’s Boxing Day. And if you think that means a day when some people are looking forward to an evening broadcast of two guys in a ring trying to knock each other out, it’s likely that you’re not from a country formerly part of the British Empire.

While Americans are more likely to be reminded that today is the start of Kwanzaa, in Great Britain and several other countries, such as Canada, Australia and Kenya, today is a national holiday, when many citizens can decompress after their Christmas festivities before heading back to work.

The Associated Press noted that Boxing Day has evolved into a “day of relaxation and indulgence—and shopping,” it’s also a day when many people open their homes to family and friends who “drop by for turkey, ham, and perhaps half-consumed bottles of wine left over from Christmas dinner.”

Boxing Day’s origins are thought to have begun centuries ago, when hard-working servants who had been preparing their masters’ celebrations would be given December 26 off.

But why the focus on a “box”? There’s some dispute about the history.

“Perhaps the most widely held understanding of its origins comes from the tradition of wealthier members of society giving servants and tradesmen a so-called ‘Christmas Box’ containing money and gifts on the day after Christmas,” the Associated Press explained. “It was seen as a reward for a year’s worth of service. Others believe it comes from the post-Christmas custom of churches placing boxes outside their doors to collect money for distribution to less-fortunate members of society in need of Christmas cheer. Some trace it to Britain’s proud naval tradition and the days when a sealed box of money was kept on board for lengthy voyages and then given to a priest for distribution to the poor if the voyage was successful.”

The Oxford English Dictionary traces the term to the 1830s and defines Boxing Day as “the first week-day after Christmas-day, observed as a holiday on which post-men, errand-boys, and servants of various kinds expect to receive a Christmas-box.”

Boxing Day traditions spread throughout the old British Empire. Even in Hong Kong, which has been entirely under the control of the People’s Republic of China since 1997, December 26 is still observed as a General Holiday, now called officially “The first weekday after Christmas Day.”

Some might imagine that Boxing Day is a good day to head off to “big box” stores and look for good post-Christmas deals. Or sit on the couch and see what entertainment might be on “the box.” Or even see what latest unboxing videos YouTube has to offer.

While there have been few attempts to bring Boxing Day traditions to the United States, a particularly American custom seems to have affected the British observance of the 26th. From the UK and other former Commonwealth nations, Boxing Day has taken on characteristics of Black Friday, the official start of the “holiday shopping season” in the U.S. There are reports of long lines gathering outside stores before dawn—and even some businesses beginning the sales on Christmas Eve and even extending them into a Boxing Week.

But anyone who thinks that Boxing Day is the day when all the holiday decorations need to be put back into their respective boxes and sent back into storage is missing an important aspect about Christmas. Though it might seem like it’s over (radio stations aren’t playing too many carols anymore, and Christmas trees are starting to hit the curbs) Christmas has only just begun. The Christ Child was still in the manger for some time, after all—a box of sorts—and we have all kinds of liturgical commemorations connected with the coming of the Messiah in the days ahead. Some of us might start humming “Good King Wenceslas,” a Christmas carol with its reference to the “feast of Stephen,” which is today’s feast day. The first martyr to die for his faith in Christ, St. Stephen represents the Church in her own infancy, taken note of in the season of the Messiah’s infancy.

Then there’s the Slaughter of the Innocents, who died when Herod was feeling threatened by a “newborn king”; the feast of the Holy Family; the veneration of the Christ Child by the Wise Men from the East, who carried their gifts, presumably, in boxes; the Presentation of the Lord in the Temple on February 2, and of course the Baptism of the Lord by St. John the Baptist.