Meet John, the Forrest Gump of the New Testament 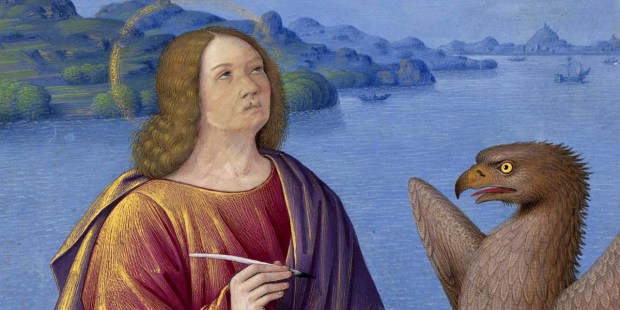 This Evangelist brings his own paradoxical simplicity to everything.

St. John the Evangelist is the Forrest Gump of the New Testament — he was there at all the key moments of the life of Christ and the Early Church, but brought his own paradoxical simplicity to it all.

He was there for his first miraculous catch of fish and his last; John left his dad and his boat when he was called; he was at the raising of Jairus’ daughter, the Transfiguration, and the Agony in the Garden. He was with Peter at the Beautiful Gate, and in jail.

John was there for it all. But my favorite facts about John are the ironic facts that are uniquely John.

I love how he dwells on love …

After all, John’s New Testament letters dwell on love. He is the author of the immortal phrase, “God is love” and immediately said what this implies: That we must love all people.

Legend has it that, at the end of his life, when he was very old, his homilies were often reduced to just the word “Love” — said with utterly compelling conviction.

… and I love how, despite all the love, he is an original of the “sons of thunder.”

Love is the opposite of indifference, not hatred. To love passionately you must be passionate about truth.

John is a prime example. John and his brother James are called the “sons of thunder” because they asked Jesus to call down fire on a city that rejected him. They also asked Jesus to grant them special favors when he came to judge the world.

Far from contradicting John’s dedication to love, his fierce antagonism to sin stayed with him his whole life, and led him to define love this way: “this is the love of God, that we keep his commandments.”

You’ve got to love John’s unashamed intimacy in his love of Jesus. He wasn’t afraid to literally lay his head on Jesus’ chest and ask him for special information right after Jesus has made a painful announcement.

… and won a footrace to his empty tomb after he rose.

But he also had enough love to run at full speed to Jesus’ tomb after hearing Mary Magdalene’s report of the Resurrection — and enough competitiveness to beat Peter, who ran to the tomb at the same time. Certainly, in his Gospel account of the “footrace” he wanted to show the proper deference one must show to the head of the apostles. But he did so by pointing out who won. Twice.

Jesus spent one of his last words from the cross giving his Mother to John (and to us) and in his Gospel, John makes sure to point out that Mary, after that point, lived with him.

Mary then played a key role in the newly forming Church — first, by gathering the Apostles in prayer before Pentecost, and later by living with the author of the most theological Gospel in Ephesus.

Read more:
What does St. John the Evangelist have to do with wine and snakes?

… but, even so, when he saw Jesus years after the Resurrection, he fainted.

Early on in the book of Revelation, John describes how the book’s visions came to him one Sunday when he was in exile on the island of Patmos.

Jesus himself visited him. Here’s how he looked: “like a son of man, clothed with a long robe and with a golden girdle round his breast; his head and his hair were white as white wool, white as snow; his eyes were like a flame of fire. His feet were like burnished bronze.”

Which makes his next words perfectly understandable: “When I saw him, I fell at his feet as though dead.”

The Lord revived him with a word. He was used to John.

Read more:
The oldest known images of the apostles