What is the empty tomb doing here? 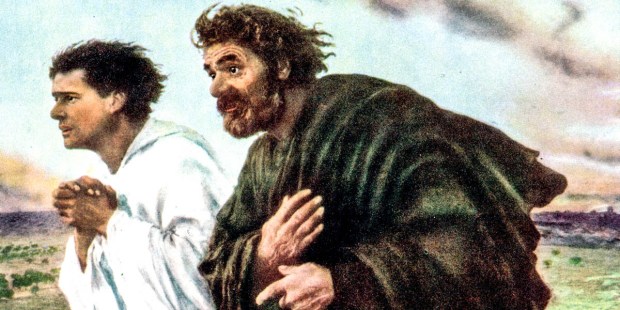 The second of the King’s entourage processes in. What do we learn from this member of the Comites Christi

On the first day of the week,
Mary Magdalene ran and went to Simon Peter
and to the other disciple whom Jesus loved, and told them,
“They have taken the Lord from the tomb,
and we do not know where they put him.”
They both ran, but the other disciple ran faster than Peter
and arrived at the tomb first; he bent down and saw the burial clothes there, but did not go in. —John 20:1a, 2-4, from the Gospel for the Feast of Saint John the Evangelist

On December 27, Catholic Christians honor St. John, Apostle and Evangelist, the second of the Comites Christi, the “Companions of Christ,” who witness to us the ways we can offer our lives for the new-born King. Unlike the martyrs, including St. Stephen, whom we honored yesterday, and the Holy Innocents, whom we will celebrate tomorrow, St. John reminds us of how we can give ourselves wholeheartedly in service to the Savior. Moreover, the chants and readings of the Mass for this feast recall that first Easter Sunday when Peter and John raced to the tomb to find that the Lord had, indeed, been raised.

According to biblical accounts, John was the son of Zebedee, a fisherman from Bethsaida. He, along with the Apostle Andrew, had been a disciple of John the Baptist, before following Jesus (see John 1:39). Most commonly known as the “Beloved Disciple,” and honored as the author of the fourth Gospel and three New Testament letters, John shared in some of the most significant events in Jesus’ life, including the Transfiguration and the Agony in the Garden. It was also John who reclined next to Jesus at the Last Supper (see John 13:23) and stood with Mary beneath the cross on that Good Friday (see John 19:25).

After Pentecost, John ministered alongside Peter in Jerusalem and Samaria (see Acts 8:14) and, according to legend, he traveled to Antioch and provided a home for the Blessed Virgin Mary in Ephesus. Exiled to the Island of Patmos, where he is traditionally believed to have written the Book of Revelation, he died toward the end of the first century. According to St. Jerome, at the end of John’s life, when asked to preach to his community, he sermons would simply be, “Little children, love one another.”

Admittedly, as with the Feast of St. Stephen, today’s celebration, with its retelling of the discovery of the empty tomb, might seem out of place during these days of Christmas. But, with its proclamation of the Resurrection, this feast is also a sort of continuation of yesterday’s celebration of the Feast of St. Stephen, which highlighted the mystery of the Cross. These feasts together invite us to reflect on the presence of the Paschal Mystery—the Mystery of Christ’s saving action—within the Christmas mysteries.

This feast also invites us to reflect how the vocation of the Apostles—to tell the story of Jesus—witnesses to the great truth of Christmas: the Word became flesh and dwelt among us. As today’s First Reading, from the first of the letters attributed to Saint John, reminds us:

How does today’s feast—especially the Readings of the Mass—enrich your celebration of Christmas?

How can you more effectively live St. John’s admonition to “love one another”?

What is the connection between the Mystery of the Incarnation and the mystery of the empty tomb and the full Paschal Mystery?

Words of Wisdom: “The Disciple of Love, after having rested his head on the Heart of Jesus, says that no ear can hear, nor can the mind of man conceive the happiness of the elect.”—St. Frances Xavier Cabrini