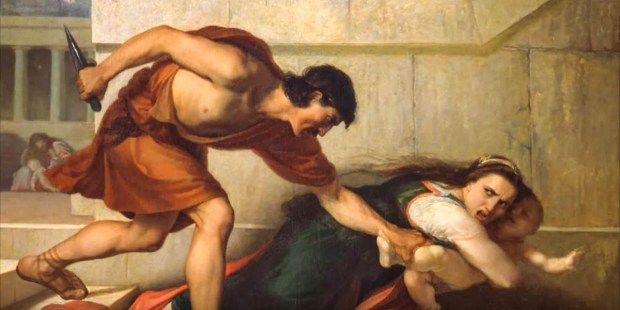 The Medievals invite us to reflect on the Christmas and Paschal Mystery with this trio of feast days.

When Herod realized that he had been deceived by the magi,
he became furious.
He ordered the massacre of all the boys in Bethlehem and its vicinity
two years old and under,
in accordance with the time he had ascertained from the magi. —Matthew 2:13-14, from the Gospel for the Feast of the Holy Innocents

On the 28th day of December, we celebrate the last of the Comites Christi (“Companions of Christ”). In these days after Christmas, the Holy Innocents, those infant boys of Bethlehem murdered by order of King Herod following the visit of the Magi (see the Gospel for today’s feast), stand alongside the protomartyr St. Stephen and St. John the Apostle and Evangelist, witnessing to Christ’s victory over sin and death by the power of the Incarnation.

These innocent victims of Herod’s jealousy and rage gave testimony to the Messiah and Redeemer, not by any words they spoke, but by the shedding of their blood. Their story invites us to remember the experience of the first Christians, as we recall the fullness of the Paschal Mystery in this season of the Incarnation and Nativity.

This is why the antiphon for the Canticle of Zechariah for Morning Prayer for today’s feast can declare:

At the king’s command these innocent babies and little children were put to death; they died for Christ, and now in the glory of heaven as they follow him, the sinless Lamb, they sing for ever: Glory to you, O Lord.

This scene from the Gospels is not included in children’s Christmas pageants and is more often than not simply ignored in our telling of Christ’s birth. This is because these children, in all their innocence, suffered and died senseless deaths, and there is no way to sanitize or explain away this tragic tale. And yet, the story of the Holy Innocents remains an essential part of the Christmas story. Because, even here, in this dark story, devoid of the holiday cheer that we associate with these holy days, the light of promise continues to shine. These children share in the sacrifice that the “newborn King of the Jews” (see Matthew 2:2) would himself experience on the Cross at the end of his own life.

In faith, we recognize that the Child who has been born for us was born into a specific time and place, into a world that was not all that different from our own. Just as in our day, the rich and powerful of first century Palestine were bent on protecting their wealth, their influence, and their agendas, not caring who was destroyed in the process.

And yet, as we hear in Mary’s Magnificat, God casts down the mighty from their thrones and lifts up the lowly, including defenseless children whose only crime was being born. Even in the grim tale that is at the heart of this feast, God’s saving action—perfectly expressed in the Incarnation of the Son—transforms human cruelty and suffering, reminding us that the violence and death we encounter too often in our war-weary world is not the end of the story.

Read more:
Pope on aborting the disabled: Like the Spartans but with more cruelty and science

And so, on December 28, we continue the long-standing tradition of honoring the Holy Innocents as martyrs. Joining the poet Prudentius, we praise the Innocents as “sweet flowers of martyrdom / cut down in life’s bright dawning hour,” and as “playing, in their simplicity, by God’s altar with the crowns and martyrs’ palms that are their heavenly reward” (from “Hymn for Epiphany”).

How does this feast of the Holy Innocents help to deepen your understanding of the meaning of Christmas?

Where do you see the light of Christ shining in the darkness in our world today?

How can you more effectively pray for and support those innocent children, women, and men who suffer from injustice, exploitation, and neglect to find justice and peace?

Words of Wisdom: “These could not speak, yet they bore witness to Christ. They could not sue their limbs to engage in battle, yet they won the palm of victory.”—St. Quodvultdeus