The hidden secret about childhood in Dr. Seuss’s books 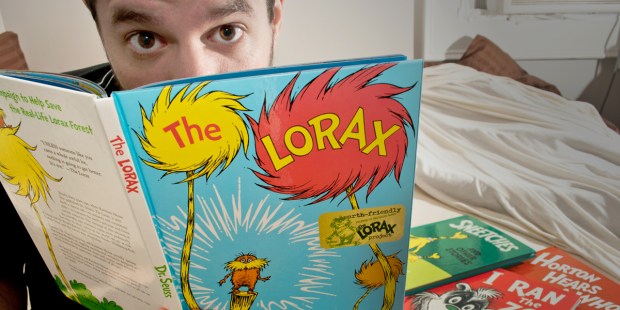 In our demand that our kids conform, are we destroying something beautiful?

My brother and his wife came to visit us for Christmas. They live in Austin, which isn’t far, but with busy work schedules on both ends and five children on mine, we don’t get to see them often. Which is a shame, because I adore them both, and love talking with my sister-in-law.

Like me, she was an English major. Unlike me, she used her degree in a more conventional way — she started teaching at the college level but gradually worked her way to teaching high school, which is where her heart is. Our conversation about the way she revamped her curriculum this year gradually led to one about young adult fiction, then children’s literature. Of course, Dr. Seuss came up and I told her my working theory about him — namely, that he must have really hated children.

At first she was baffled, but when I started pointing out how horribly the children in various books behaved (The Cat in the Hat, Hop on Pop), she got pensive for a minute. Then she said, “Wow. You just really blew my mind.”

I wish they hadn’t left when they did, because the next day as I was re-reading an article The Atlantic recently published that uses a different series of children’s books (Mrs. Piggle-Wiggle) to highlight the disparity between childhood and adulthood, I realized that my theory on Dr. Seuss is dead wrong. The problem isn’t with the children — it’s with the adults, and the expectations we place on kids to behave — not as children, though, but as tiny adults:

Your children love learning, reading, exploring, creating; at home they write books, invent board games, make up languages, build gadgets out of old coffee makers. They appear to have the makings of successful adults — they’re resourceful, independent, and interested in contributing something to the world. But the markers of success in children are in many ways the opposite of these markers of success in adulthood, and in the meantime — a long, decade-plus meantime — children are trapped in a kind of juvenile detention where success is defined by how well adults can manage them, the chief adult being you, the parent …

Parents’ desire for conformity in their children comes from something much deeper and more impossible than getting them to do their homework. We, parents, want our children to be us; at some unconscious level, we produced them to replace us. But thinking beyond ourselves requires an active imagination — and imagination, with all its frightening risks, is exactly what parents are unconsciously trying to suppress, in our children and in ourselves.

But I do find myself trying desperately to get them to conform in the moment, almost entirely because not conforming is either born of disobedience (which I should and do address as a sin) or it’s born of, yes, imagination. Creativity. Two things I prize and value so highly … but two things that require time and patience to cultivate — especially in the middle of a busy life.

Here’s the thing about the kids in Dr. Seuss books: they’re not actually horrible children. They’re just children, doing things children would do. Luckily my children live in the real world where they don’t have the opportunity to pick up strange, giant creatures in the park, give them alliterative names, bring them home and put them in the shower, but you know what? If they did, I guarantee you 100 percent that they would. And you know what else? I can pretty much guarantee that on most days, I would react just like the parents in those books — appalled, horrified, or apathetically resigned to all that hopping.

While I never want to err on the side of permissiveness, especially when it comes to disobedience, I’m trying more and more to remind myself that I don’t want to be the kind of parent that crops up in Dr. Seuss books, either apoplectic in horror or slack-jawed with apathy. I’m making more time to stop and listen to my children, to give them the time and the space they need to use their imaginations and exercise their creativity, even when … or perhaps especially when … it doesn’t match up with my expectations and my schedule.

I don’t think Dr. Seuss, unlike Mrs. Piggle-Wiggle, hated children at all — I think he loved them, precisely for all their imagination and exuberance. But I also think he was aware of how seldom the adults in children’s lives valued that imagination and exuberance. Maybe his books were meant to capture exactly that — in which case, maybe they’re not really written for children at all. Maybe they’re written for us adults, as a reminder to take the time to see and appreciate the wonderful world our children inhabit, and as a plea to make space for that world during the brief time when our children are still children.

Read more:
What the Grinch who stole Christmas got right