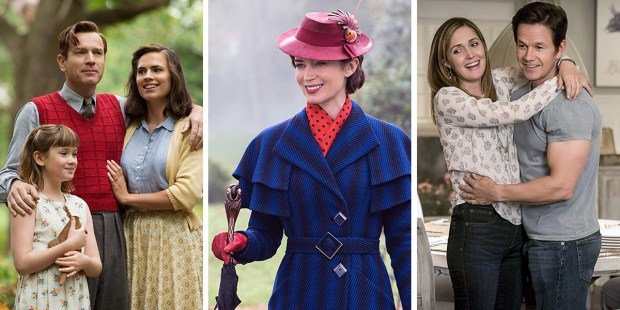 As that pilot from ‘Star Wars IV: A New Hope’ once said, “Almost there.”

We’ve nearly reached the end of another year, and for some of us it felt like a long time coming. Sure, a royal baby was born, and the year certainly started off on the right note for Philadelphia Eagles fans. But overall, the world felt pretty angsty in 2018, and in pop culture we lost Aretha Franklin, Stan Lee, and others we’ll miss for a long time.

Thankfully, however, pop culture also often reminded us about what’s really important to us, or at least what should be: family.

We saw plenty of family-oriented films make waves this year. Some were about family. Some were for the family. And more than a few were really great films, too. Using all that criteria, here’s a look back at what I think are the year’s very best “family” films (even if not all of them are suitable for yours).

He’s all grown up now, this Christopher Robin, and he has no time for fun or games or the Hundred-Acre Wood. A middle manager in a luggage company, Christopher’s got more on his mind than a bear of very little brain. But all those adult responsibilities sometimes stand in the way of those he’s trying to support: his wife and daughter. “I’m lost,” he admits, and it’s up to some very old friends to help him find his way again. This under-appreciated Disney story is a delightful movie for kids and adults: It acknowledges we all have to grow up sometime, but we should never lose complete touch with the child in us all.

It’s always a big step when your significant other brings you home to meet the fam. But when Nick Young invites his girlfriend, Rachel, back to Singapore with him, the step is bigger than she’d ever imagined. Turns out, Nick’s family is loaded. They’re not just we-can-afford-first-class-airfare rich, but let’s-buy-the-whole-airline rich. Moreover, Nick’s family is as tight-knit and as traditional as they come, and Nick’s mother, Eleanor, doesn’t cotton to a young, free-spirited American stealing her son away. This fun, sweet, surprisingly affecting romcom was one of the year’s biggest surprises at the box office. And while a love story stands at its heart, family forms its soul. Some language and a couple of sexual allusions to watch out for here, but it’s far more fair than foul.

Superheroes, or “supers,” are still outlawed at the opening of Incredibles 2, but marketing tycoon Winston Deavor and his tech-savvy sister, Evelyn, want to change that. They want to start a PR push to legalize supers again, and they want Helen Parr, a.k.a. Elastigirl, to be its first star. Alas, this means that Helen will have to leave her super-powered family in the care of Bob, her husband. And even though Bob was once known to the world as Mr. Incredible, he’s barely credible as a single parent. Leave it to Pixar to make the super part of a superhero story feel anticlimactic. The real action takes place at home, with Bob fighting with his son’s math, his daughter’ boy problems and baby Jack-Jack’s sudden influx of superpowers. Incredibles 2 is a salute to parenthood — and all the challenges and rewards that come with it.

Pete and Ellie Wagner always had enough to handle flipping homes. Kids were never part of the equation for them — until now. They decide to become foster parents to not one, but three kids in need. And even though their upstart nuclear unit threatens at times to go nuclear itself, Pete and Ellie wind up finding that loving these kids is harder, and more wonderful, than they ever imagined. This movie comes with some really significant content concerns, unfortunately. The language can be super-foul. But for those looking for a realistic, hilarious look at what it really means to be a foster parent, this is the movie for them.

Michael Banks was just a kid when a magical nanny named Mary Poppins literally floated into his life. But now that he’s all grown up, it’ll take more than a spoonful of sugar to cure what ails him. His wife died tragically. He’s trying to raise three kids on his own in the middle of the Great Depression. Now the Fidelity Fiduciary Bank is trying to repossess his home. But just when things look their worst, Ms. Poppins comes a-calling again, just in time to remind Michael and his children that, as grim as things may look right now, hope might be just around the corner — and that sticking together in the midst of sorrow can mean the world.

England’s favorite raincoat-wearing bear is determined to buy a very special book for his very special Aunt Lucy. Alas, someone else wants the book, too: The nefarious culprit steals it and frames Paddington for the crime. But even though Paddington’s thrown in the slammer, he never lets his famed courtesy slip: He’s as kind and as conscientious as ever — even to the hardened criminals in the clink with him — and soon everyone wants to free Paddington on account of his good behavior, his adoptive Brown family most of all. Paddington 2 is a truly wonderful tale that probably won’t be up for a lot of Oscars … but maybe it should be. It holds a 100 percent “freshness” rating on Rotten Tomatoes, after all, making it technically the best-reviewed film on this list.

I warned you that not every movie on this list would be suitable family viewing. Roma, available on Netflix now, contains one male nude scene and some sporadic strong profanity, but it’s also an incredibly powerful, beautiful film about family, and its sometimes unexpected members. Roma focuses on Cleo, a maid for an upper-middle-class family in Mexico City. She washes and cleans and takes the children to school, but she’s more than just a servant. To the family’s four kids, she’s almost mom: She loves them, and they love her right back. And when their father unexpectedly leaves, Cleo becomes the mortar that holds the family together. Based on director Alfonso Cuarón’s own childhood memories, Roma is a moving depiction of servanthood, sacrifice and love, and content problems aside, it’s my vote for the year’s very best picture. (You can read more about why I think so here.)

Aliens have invaded earth, and they’ve come with a catch: While they can’t see worth anything, they can hear everything — and they’ll kill whatever they hear. That puts survivors like the Abbott family in a serious pickle, especially given that Evelyn Abbott is just about to give birth … and babies don’t know the old adage better to be seen and not heard. Here’s another to be cautious of letting the whole family watch. This dystopian sci-fi horror flick can be seriously intense and pretty graphic at times. But the movie’s messages about family love and parenting under absolutely the worst possible circumstances can be deeply affecting and even, at times, beautiful.

Through his gentle children’s show, Mister Rogers’ Neighborhood, Fred Rogers entered into many a family and taught kids lessons important lessons about honesty, kindness and doing what’s right — lessons that Rogers seems to have followed and taught off camera, as well. If you watch one doc this year, this is the one.

We’re almost through with the old year and heading onto the next one — one filled with hope and promise. But whatever the year holds, these movies remind us that we can celebrate the good things more joyfully, and face our challenges more forcefully, when we do it as a family. Best to you and yours, and have a very happy New Year.

No family is perfect. And the family of T’Challa, king of Wakanda, hits a significant rough patch here. His dearly departed father turned out to be not quite the man T’Challa thought he was. His cousin, Erik Killmonger, wants to take his throne — putting not just his mother and sister in jeopardy, but his entire kingdom as well. Sure, this superhero story has its share of stunts and CGI, but at the heart we find a story of a man doing his best to come to terms with his  family and preserve his still-here loved ones in the process.