Bishop Barron on listening to Jordan Peterson and Sam Harris 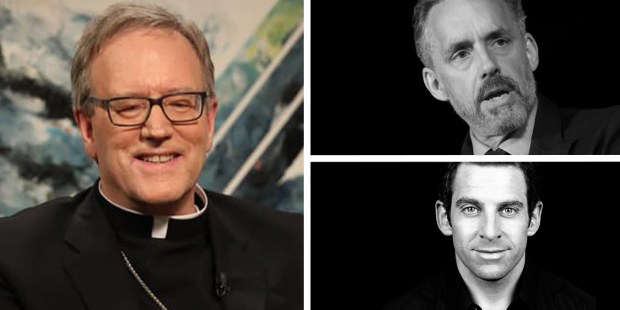 Harris is perhaps the most strident critic of religion on the scene today.

Over the Christmas break, I spent a fair amount of time binge-watching Jordan Peterson videos. For those not in the know, Peterson is not the latest hip-hop sensation; he is a psychology professor from Toronto who has made a rather substantial splash as a culture-commentator and public intellectual, largely through appearances on social media.

Of the many Peterson videos, the ones that intrigued me the most featured his dialogues with Sam Harris, one of the “four horsemen of the new atheism” and perhaps the most strident critic of religion on the scene today. The reason that Peterson was paired with Harris is that the former has begun to explore, in remarkably perceptive ways, the psychological and archetypal significance of the biblical stories and hence implicitly to question the wholesale dismissal of religion that one finds in the new atheists.

In the discussions I watched, Harris, like his colleagues, the late Christopher Hitchens and Richard Dawkins, focused his attention on the ways that religion, due to its dogmatism and allergy to self-critique, has given rise to myriad forms of oppression and violence. We can find this, of course, in the Bible itself, which seems to condone slavery, countenance genocide, encourage the mistreatment of women, and sanction the brutal elimination of conquered people. And we see it, Harris argues, throughout religious history, finding expression in inquisitions, witch hunts, pogroms, etc. Behind all of this mayhem, the atheist contends, is the typically religious tendency to accept things on the basis of faith, to set aside critical reason, and to embrace authoritarianism.

In answer to this familiar objection, Jordan Peterson spoke of two extremes that dog the intellectual and moral project throughout the ages—namely, fundamentalism and chaotic relativism. The first—uncritical, oppressive, arrogant, and violent—produced and continues to produce the very negativities that Harris legitimately complains of; but the second—anchorless, impotent, without moral seriousness—has proven to be just as dangerous. The responsible moral actor and intellectual explorer lives in the space in between those two extremes.

If I am reading Peterson correctly, he feels that Harris and his atheist colleagues fall into the trap of identifying the dogmatic and fundamentalist shadow that inevitably accompanies religion with religion tout court. And they, accordingly, tend to overlook the substantial and very positive contributions religious thinkers and agents have made in helping us avoid the chaos of sheer relativism, especially in regard to matters of ultimate concern.

Here I would substantially agree with Peterson, for I have simply found it impossible to take seriously a view that rules out of court the massive contribution that religion has made to human culture. At the same time, I would also signal a sympathy with Harris in the measure that I, humbly and gratefully, acknowledge that it was the Enlightenment critique of Christianity that compelled the Churches to reconsider some of their patterns of behavior and strategies of biblical interpretation. We did indeed need some of the luminosity of the Enlightenment to eliminate the shadow that he correctly identifies.

So what precisely does Jordan Peterson propose in regard to religion? I’ll confess that things can get a bit murky, due in part to his meandering and ruminative style. With his stress on archetypal psychology, he is obviously a Jungian, but what became clear to me as I watched these videos is how deeply Kantian his approach is. The great 18th-century philosopher opined that we cannot know the existence of God through the exercise of theoretical reason. The classical metaphysical approaches to God through cosmology and metaphysical speculation are ruled out (see the Critique of Pure Reason for the details).

However, Kant maintained, we can come to a kind of working knowledge of God through what he called practical or moral reasoning. The idea of God as the summum bonum, he argued, is one of the conditions for the possibility of undertaking the moral enterprise at all. In other words, we would never endeavor to do any good thing unless we implicitly accepted the supposition that God is.

A variation of this approach can be found in Kant’s Religion within the Limits of Reason Alone. In that text, Kant argues that the story of Jesus presents the “archetype of the person perfectly pleasing to God,” and hence provides, at least for Westerners, the narrative substrate for the moral undertaking. We do not have to worry particularly about the historical veracity of what the Gospels communicate, for it is the story as such that matters.

I think that Peterson is reviving this Kantian approach for our time. He usually backs away from metaphysical speculation about the existence of God; he doesn’t seem particularly interested in classical arguments for a first cause or necessary being. But he does indeed think that the archetype of God, expressed typically in narrative form, is essential for moral thought and moral behavior. Biblical language regarding devotion to God or following the will of God reflects and gives expression to this inchoate supposition.

So where does this leave us? I think that Jordan Peterson represents a great step beyond the one-sided (though necessary) critique offered by Sam Harris and his atheist colleagues. He has helped an awful lot of people who have been malformed by a doctrinaire secularism to open their minds and hearts to the truth embedded in the Bible and the great religious traditions. But he remains stuck, it seems to me, on one side of the Kantian divide. The living and personal God of the Bible remains, for him, an archetype, an idea, a heuristic device. If I had the chance to sit down and talk with him, I might want to press him on this point.