Who were the Magi, really? 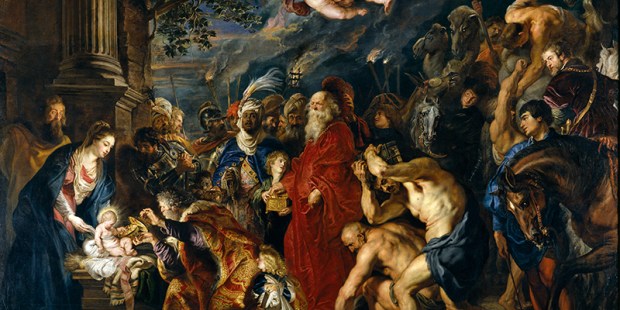 Some early commentators suggest the magi were Persian, but others affirm they were Jews from Yemen.

Although they are central to the Christmas story, the Bible tells us very little about the Magi. In fact, we find these three wise men (some traditions even claim they were kings) only in the second chapter of the Gospel of Matthew (2:1–12), who presents them as visitors from the East who arrive at Jerusalem looking for the child. Interestingly, the biblical text doesn’t specify if there were three of them, or more: early Christian art (for instance, in the Catacomb of Priscilla) is responsible for presenting three magi in the adoration scene. What the biblical text numbers are the gifts, not the magi: after meeting with King Herod, the magi follow the same star that led them to Jerusalem all the way to Bethlehem, where they find the child and his mother, and present him with the three well-known gifts of gold, frankincense, and myrrh. After that, Matthew only adds they went back to wherever they came from, and nothing more. No further details were added on whether they were Persian Zoroastrians, or Babylonian astrologers, or Indian sages. Some early commentators suggest the magi were actually Persian, but others affirm they were Jews from Yemen.

As is often the case with some characters in the gospel, an early apocryphal account of the Christmas story, allegedly written by the magi themselves, has been preserved in a Syriac manuscript from the 8th century. Held in the Vatican Library, the Revelation of the Magi, as the manuscript is known, not only includes some legends regarding the origin of the magi, but also claims they went back to their homeland(s) to preach the Christian faith, and that they were baptized by the Apostle Thomas.

As the website of the Biblical Archaeology Society explains, Bible scholar Brent Landau recently translated this manuscript into English. He thinks earlier versions of this text might have been written around the 2nd century, shortly after Matthew’s gospel was composed. The text, Landau claims, doesn’t provide us with a satisfactory answer to the question of who the magi were, but rather tells us something about the Christian sect that either authored or read this text. In it, the magi are referred to as “those who pray in silence,” and are presented as descendants of Adam’s third son (Seth), coming from a mythical land called “Shir” and living in a quasi-monastic fashion. As Landau explains, the minute description of not only the magi but also their religious practices might reflect the life of “some actual community out there that practiced and kind of envisioned themselves in the role of the magi.”

Some other sources, of course, offer different theories. For instance, John of Hildesheim’s Historia Trium Regum or History of the Three Kings, a text belonging to the 14th century, says Balthasar, Melchior and Caspar (he already uses these traditional names) were from India, Persia, and Chaldea (present-day Iran and Iraq). They set off separately, met at the birthplace in Jerusalem and then journeyed together to Bethlehem. After worshiping Christ, they returned together to India, where they built a church, and after another vision that revealed that their earthly life was about to end, they died at the same time and were buried in their church in India.

Two hundred years later, John of Hildesheim explains, St. Helena, the mother of the emperor Constantine, traveled to India and recovered their bodies. She put them into a beautifully ornamented casket and placed them in the great church of St. Sophia in Constantinople. In the late 6th century, the emperor Mauricius had the relics moved to the Italian city of Milan.

The alleged bones of Balthasar, Melchior and Caspar remained in Milan until the 12th century, when the city of Milan rebelled against the Holy Roman emperor Frederick Barbarossa. In need of assistance against the Milanese, Frederick appealed to the archbishop of Cologne, who recaptured Milan for the emperor. In gratitude, and “at the archbishop’s great entreaty,” the emperor transferred the relics to the archbishop of Cologne who, in 1164, transported the bones to Cologne, where a Gothic cathedral was eventually build to house them. The bones are there to this day, in a beautiful gold reliquary in the cathedral.