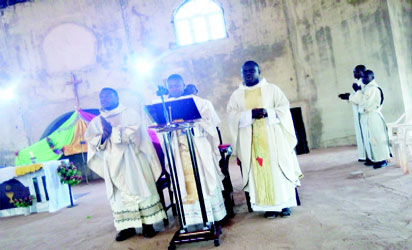 The two captive priests survived on half a loaf of bread and little water for four days.

Father Cajetan Apeh had been ordained a priest only four short months before he and another priest from his parish were taken hostage by armed herdsmen at Anam in Anambra State, Nigeria. The pair were held for four days, during which time they were reportedly given only a half a loaf of bread and little water to sustain them both.

On Wednesday, shortly after celebrating a New Year Mass at St. Joseph’s Church, Fr. Apeh recounted the tale of his captivity to his congregation. He explained that on Christmas Eve, he drove one of his fellow parish priests who was sick to the hospital. On their way back they stopped at the store to buy supplies for the visit of Cardinal Francis Arinze from Rome.

Vanguard reports, the pair were on their way back when they became accosted by armed local herdsmen:

“A Fulani herdsman armed with AK 47 rifle, jumped out from the bush and pointed his gun at us, threatening to shoot if we didn’t stop. It was really an ambush.

“Initially, we thought it was just robbery, but after searching and taking all our possessions, including some loaves of bread; they led us into the bush where two of us were given half a loaf of the wheat bread they took from us for four days before our release to our superior, who drove from Enugu to Anam on the instruction of the herdsmen.”

Fr. Apeh said he was not allowed to speak with his fellow priest during their captivity, which took place in the wilderness and exposed the priests to the elements and attacks from mosquitoes.

While the herdsmen were warm in their coats, Fr. Apeh was dressed in a pair of trousers and a T-shirt. He said his captors made a fire for the two of them on Christmas, but the following day the sick priest’s condition began to worsen:

“On December 26, the condition of my parish priest deteriorated, because, although we were given some drugs in the hospital, he was not allowed to take his medications. His blood pressure became very high and he was very weak.

“They were communicating with our superiors, telling them that they wanted big, big money as ransom but when after all these days of our kidnap, nobody offered them any money they became disappointed.

The herdsmen then demanded the priest’s bank account information, but neither one had their own bank account, as everything belongs to the church. The captors asked if they were married and when the priests responded in the negative, they told Fr. Apeh, “that if I was married, my wife or members of my family would have been calling them and running around for ransom.”

The pair were finally released when their superior traveled to Anam from Enugu, unaccompanied by any policeman or security agent, to negotiate their release. Fr. Apeh told his congregation, “Due to your prayers and those of others throughout the world, we were released to our superior…”

Fr. Apah said the only food they were given was the initial half a loaf of bread they were given. The two men survived on this bread, along with one satchel of water shared between them both. During their captivity they were only allowed to stand to relieve themselves, otherwise they were forced to sit or lay the entire time.