Chateaubriand, the author who wanted to return France to its Christian roots 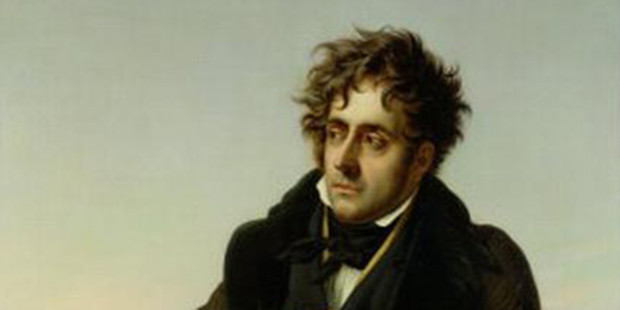 Chateaubriand: “Of all the religions that have existed, the Christian religion is the most poetic, the most humane, the most favorable to liberty, to the arts and to letters.”

François-René de Chateaubriand (1768-1848) was a French writer, politician, diplomat, and historian, who lived through a tumultuous period of French history. In the midst of the social upheaval of the militantly secularist French Revolution and the following years, Chateaubriand defended Christianity with eloquence.

A forerunner of Romanticism who inspired 19th-century literature, Chateaubriand devoted his whole life to the service of the Bourbon monarchy and Catholicism. Since religion was prohibited during the revolutionary era, and because the massacres committed during this period quickly had a great impact on him, he fled the country, first to the virgin lands of the United States of America and then to the misty city of London.

He thus watched from abroad the havoc that ensued in France and that lead to the civil war after 1789, when a part of the population dissociated itself from a regime that wished to separate itself from the Church and its clergy.

It was during those years of exile when he published his first writings and decided to adopt the role of a man of letters with an essay in which he tried to analyze the origins of the French Revolution.

He did not return to France until 1800, after the coup d’état of Bonaparte’s 18th Brumaire. The latter, aware of the need for religious pacification, resumed the relations of the French State with the Church and the Vatican through a concordat.

In addition, in 1802, the publication of his striking book The Genius of Christianity was in line with the policy of religious pacification desired by the first consul. Chateaubriand—like Napoleon, but for different reasons—wanted to re-link France with the Christian heritage that had been broken off by the Revolution.

In this book he highlighted the poetic dimension of religion and its rituals through words that breathe a great pre-romantic sensitivity.

He restored the poetic breath of the Middle Ages that contrasted with the rationality of the Enlightenment. The book was a great success. Ghislain de Diesbach, a 20th-century French author and biographer of Chateaubriand, would write: “He had revived the Christian religion for a new generation that would get enthusiastic about everything that he had brought back to the foreground—worship, the objects of sacred art, cemeteries, etc.—and which would use those religious themes for its literature and painting.”

Chateaubriand himself summarized his thought: “Of all the religions that have existed, the Christian religion is the most poetic, the most humane, the most favorable to liberty, to the arts and to letters … The modern world owes everything to it, from agriculture to the most abstract sciences; from the hospices for the indigent to the temples built by Michelangelo and decorated by Raphael. There is nothing more divine than its morality and nothing more lovely and more sublime than its tenets, its doctrine, and its worship; it encourages genius, corrects the taste, develops virtuous passions and imparts energy to the ideas, offers noble images to the writer and perfect models for the artist.” (From the Introduction.)

The work was a huge success and, after years of anti-Christian hatred, it served as a source of hope and inspiration for many Catholics. It was a work that moved souls, although the book did not escape criticism by certain Catholics. He was reproached for having a too melancholic character in his work, where he defended religion with the prose of a poet and not with the arguments of a theologian.

Napoleon, who was at the peak of his power, appreciated him and sent him to Rome on a mission with Cardinal Fesch, Napoleon’s uncle. The relationship between the two deteriorated rapidly, and Chateaubriand left Rome under the pressure of the prelate, who was unwilling to endure the dominant character of the author.

It is at that moment when he published The Martyrs, another great work written as a mystery of the Middle Ages, which evokes the triumph of the Christian religion under the reign of Diocletian through the story of Eudore, the Greek mythological figure.

Already in conflict with the authorities, the author decided to take his pilgrim’s staff and start his well-known trip to the Holy Land, where he then wrote his famous Itinerary from Paris to Jerusalem, published in 1811. The time he spent in the Holy City and the way he was received by the monastic communities affected him greatly, such as in the city of Jaffa, where the precariousness he observed lead him to write: “The state in which they live is similar to that of France under the Reign of Terror.”

Throughout his life he remained a great defender of the Christians of the East, never forgetting the warm welcome with which they received him.

France became marked by an increasingly strong opposition to the Napoleonic regime and its dictatorial ways after the execution of the Duke of Enghien and Armand de Chateaubriand, spy of the monarchical cause.

After the fall of Napoleon in 1814, he began a political career under the Restoration, characterized nevertheless by various disappointments. Chateaubriand’s influence was feared, and he was reproached for the period in which he maintained close contact with Bonaparte at the beginning of his reign.

However, he was awarded some prestigious positions, such as that of French ambassador to Prussia, London and Rome, as well as the Ministry of Foreign Affairs for a short period of time. These responsibilities did not prevent him from writing his most important work, Memoirs from Beyond the Grave, which crowned for posterity a literary oeuvre  and a life that had a permanent impact on French culture.