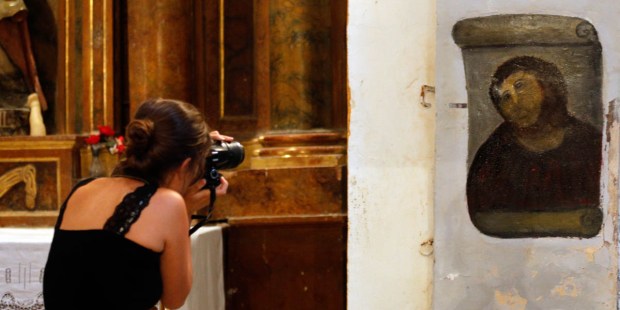 The botched restoration of this painting may have inadvertantly helped to restore the town.

If ever there was tangible evidence that God has a plan, we need look no further than the Spanish painting, Ecce Homo. Even those who are not interested in art may remember the memes which made famous the frightening, albeit well-meant, restoration of the early 20th-century painting, which has been dubbed “Monkey Christ” or “Potato Jesus” since Doña Cecilia Giménez, then 81, took on the task of restoring it in 2012.

Originally painted in 1930 by Elías García Martínez, the piece was in dire need of repair. While Giménez was only an amateur painting restorer, she could not stand by idle while the piece with so much significance to the Spanish town of Borja slowly deteriorated. Unfortunately, she had to go out of town before she finished her work and in that brief time, someone saw the unfinished piece and a meme was born.

For several months the town, feeling itself the laughing stock of the internet, turned their outrage towards Giménez, who reportedly lost 17 kg from stress and worry. Some of the anger subsided when they learned the kindly old lady had given it all she had, but now the people are praising her work, as the botched restoration has inadvertently restored the towns tourism.

The Guardian reports 45,824 people visited the Sanctuary of Mercy church, where the Ecce Homo hangs, between August and December of 2012. The numbers have dropped a bit, but in the following years they have received about 16,000 visitors annually. This is more than four times the amount Borja saw in years prior to the restoration.

The town has begun merchandizing the restored image, printing it upon bottles, thimbles, bookmarks, teddy bears, pens, mugs, T-shirts, mousepads, badges, fridge magnets and key rings. Revenues from their sales have been enough to provide jobs for the sanctuary-museum’s two caretakers and it has helped fund Borja’s care home for the elderly.

The town’s mayor, Eduardo Arilla, seems happy with the results, telling the Guardian:

“It was a media phenomenon, but it’s also been a social phenomenon when it comes to helping people,” he says. “If it hadn’t happened, maybe Borja would have become famous for something else, like its wine. But we wouldn’t be as well known as we are now.”