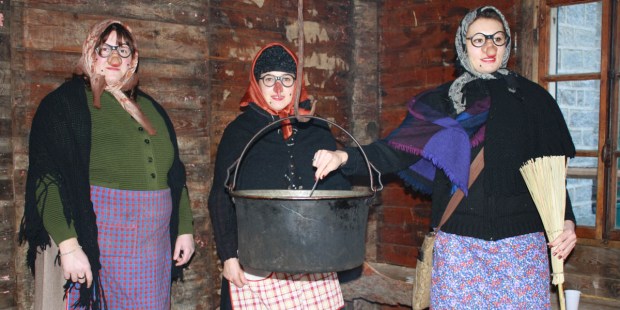 She regrets not following the Magi to see the Christ Child and continues to leave little gifts in every home she visits.

The feast of Epiphany on January 6 is one that has many rich traditions surrounding it. For example, many Italian children look forward to the eve of Epiphany, when “La Befana” will visit them and give them gifts (if they are good) or coal (if they are bad).

The tradition has many similarities to the modern Santa Claus custom, but differs greatly in its origin.

It is said that when the Magi were traveling from the East, following the star to Bethlehem, they met many people along the way. The Magi would explain to the people they met their excitement at going to see the newborn King and many would decide to join them on the journey.

One night they stayed at the house of an old woman, who received them kindly and gave them shelter and a warm meal. The Magi told her of their great adventure and it piqued the interest of the old woman. When morning came the Magi invited the woman to come along with them to see the newborn King.

However, the old woman rejected the offer, claiming that she was too busy cleaning her house with her broom. The Magi left and continued their journey following the star.

A day or two passed and the old woman realized the mistake she made, realizing that this babe in Bethlehem was the Messiah, the Savior of the world.

She gathered her broom and a few gifts and tried to hurry after the caravan of the Magi. Unfortunately, she never caught up to the Magi and continues to search for the Christ Child up to the present time. Every year on the eve of Epiphany she roams about the world leaving presents for each child she visits in reparation for her mistake.

The old woman is called “La Befana” in Italian and is often depicted in a “witch” costume, dirty from all the chimneys she goes down. However, she isn’t a “witch” in the modern sense of the word, but resembles one in the most common representations.

It is a beloved tradition among many Italians, making the feast of the Epiphany a day of celebration and gift-giving, instead of Christmas day.

Read more:
In Images: The real face of Santa Claus