St. André Bessette cured over 10,000 people in his lifetime, according to estimates 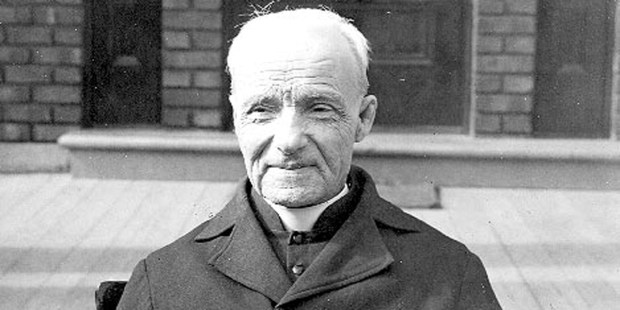 The Canadian saint may be one of the greatest healers the Church has ever seen.

It didn’t take long for St. André Bessette to become known as the “Miracle Man of Montreal.” He was a simple lay brother, not wanting much attention, but graced by God with a deep and abiding faith.

Similar to Bl. Solanus Casey, Bessette was a porter, the “door man,” for the seminary and daily went about his business with little fanfare. He spent long hours on his knees and constructed a small chapel in honor of St. Joseph, where he spent much of his free time.

It didn’t take long for visitors to Bessette’s small chapel to begin reporting cures and special heavenly favors. It soon caught the attention of the local archbishop who said after visiting the chapel, “Shall I say that miracles are wrought in this shrine of St. Joseph? If I denied that such was the case, the ex-votive offerings in yonder pyramids would belie my words. I need make no investigation, I am convinced extraordinary occurrences have taken place; corporal cures, perhaps, although it; is quite easy to suffer illusion in such cases, and spiritual cures still greater have been wrought here. Sinners have come here, have prayed, and after prayer confessed their iniquities and gone away at peace with God.”

Crowds began to form and they started to ask Brother André for his personal prayers. Miracles continued to occur and they labeled him a “Miracle Man.” Bessette only laughed at the name and said, “It is St. Joseph who does these things, I am like you, simply a suppliant.”

While he never became a priest, Brother André sat with people, heard their many sufferings and prayed with them. Afterwards many were healed of their ailments, either physical or spiritual. According to some estimates, over 10,000 people were cured (with some estimates reaching as many as 125,000).

Even after his death in 1937, people continued to report cures (and still do today). Author Patricia Treece writes about one such miracle for Catholic Exchange.

Flash forward to 1954: Joe Audino began having health problems. By 1957 they had intensified. By the next year, 1958, the advanced form of reticulum cell sarcoma was throughout his body. Radiation could no longer keep pace with the cancer. Joe was face-to-face with death, his diagnosis “terminal” and his death expected within thirty days. He was in too much pain to make a confession or receive Communion, he says. He simply lay hopelessly in bed, too weak to walk, with a football-size liver. In his troubles he thought of Br. André. And no matter how bad he felt, he never stopped praying for Br. André’s help. “I knew he’d be able to help me,” he says.

He consented to an experimental treatment that never helped anyone else. But shortly after, he was cancer free. His doctor Philip Rubin, chairman of radiation therapy at the University of Rochester Cancer Center, says, “There is no clear scientific explanation for his cure.”

St. André Bessette was a simple man, with a simple faith, a “mustard-seed faith” which could move mountains. He knew in his heart God could heal people and perform miracles, never doubting the power of God.