What’s in a name? If it’s the name of Jesus, a lot 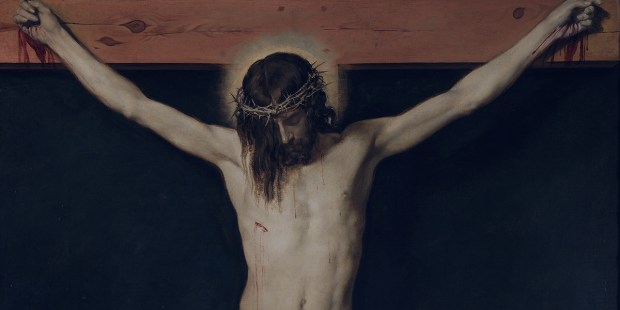 While Romeo and Juliet were on to something, when it comes to God-Saves, their insight falls short.

William Shakespeare’s work has so infused the thought of English speakers that we often use expressions from his plays and poems without even realizing it. Common turns of phrase such as “send him packing,” “neither here nor there,” “wild-goose chase,” and “be all and end all” first flowed from the Bard’s pen.

Another of his famous lines came to mind recently, as we celebrated the feast of the Holy Name of Jesus.

As Romeo and Juliet discuss their seemingly hopeless case, as children of rival families who have fallen in love, Romeo asks what it matters that he is a Montague and she a Capulet. “What’s in a name?” he ponders aloud. “That which we call a rose by any other name would smell as sweet.” Their names, Romeo is saying, should not define who Romeo and Juliet are, or what they can do.

Though we might sometimes say things like, “You don’t look like a Mike,” or “Andrew Luck just sounds like a great quarterback’s name,” most of the time we see Romeo’s point: Names, the collection of letters and sounds we use to designate a thing, have no intrinsic connection to the thing itself. Whether we call man’s best friend a dog or a hund or a canis lupus familiaris, or whether we decided to call him “Toothy McBarkeys,” we’re referring to the same thing. The name itself doesn’t tell us anything about the thing.

But this is not always so. In many cases, names are, in a way, sacramental: They make present the thing named. When a police officer says “Stop in the name of the law,” the whole weight of the legal system is made present. When an ambassador presents his credentials and says, “I represent the United States of America,” the whole nation is, in a sense, with him.

In reverse, to lose one’s name is to lose oneself. You see the terrifying moment in a movie or TV show where a character wakes up with amnesia and says, “I don’t know who I am.” One of the most chilling moments in The Lord of the Rings is when we meet the lieutenant of Barad-dur who calls himself “the mouth of Sauron,” and the narrator says: “His name is remembered in no tale, for he himself had forgotten it.”

Names carry with them a certain power. Most especially with the “name above all names.”

Read more:
How a summer with the Bedouins taught me what’s in my name

The name of Jesus, far from being accidental, does tell us something about who Jesus is. The name of Jesus does really express the truth about Him. He could not simply have been called John or Joseph or Hezekiah or Zerubbabel or anything else. His name has meaning.

We know that names often have meanings, not just in the case of Jesus. Agnes means “lamb,” Agatha means “beautiful,” and Sarah means “princess.” The name Jesus, or in Hebrew Yeshua, means “God saves.” Jesus’ name tells us His mission and purpose. Jesus’ name reveals to us who He is: the God-savior.

In the Old Testament, and even among Jews today, the name of God would not be spoken. Though God had revealed His name to Moses, the people considered it too sacred to use, and God confirmed the sanctity of His name by prohibiting its abuse in the second commandment. But the name of Jesus is one we’re encouraged to say, to draw close to, to carry on our lips as a blessing and a sign of our belonging to Him.

Jesus reveals to us the Father, and reveals to us ourselves, what humanity living in union with divinity is supposed to be. He does that in His teaching, in His actions—even in His name. What’s in a name? Nothing less than our salvation.