The 12 most important symbols found in the Christian catacombs

Discover the meaning behind the drawings that adorn these ancient underground burial places.

The catacombs are the earliest Christian cemeteries. They are subterranean caves many miles long, true labyrinths, where not only the bodies of the martyrs are buried, but also, on rare occasions, some rites were performed. That is why small altars are often found there. They began to be constructed in the 2nd century. Many of them were dug and extended around the tombs found in villas of important families in Rome, whose owners, newly converted, opened them not only for their relatives but also for their brothers in the faith. With the Edict of Milan, in the year 313, the persecution of Christians ceased, and they were able to begin to build churches and acquire land for new cemeteries. However, they continued to use the catacombs until the 5th century.

The English word “catacomb” comes from the Latin catacumba. There is some debate about the etymology of the Latin word itself; it is generally believed to come from a combination of Latin and Greek roots meaning “among the tombs.”

At first, the name of “catacomb” was given to the cemetery of St. Sebastian, where St. Peter and St. Paul had been buried. Then, with the invasion of the barbarians, who destroyed and plundered everything in their path, including the catacombs (which used to be found on the outskirts of the city), the popes decided to transfer many relics of the martyrs and the saints to churches inside the city. Little by little, over the centuries, the catacombs stopped being visited and were hidden and forgotten, until in 1578 they were rediscovered by local workers.

These secluded and hidden underground places were a perfect refuge in which Christians could bury their loved ones, and communicate freely through symbols engraved on the walls of the catacombs. It was a way of expressing their faith visibly, and some of these paintings are true works of art.

View the slideshow for the most important symbols in the Catacombs: 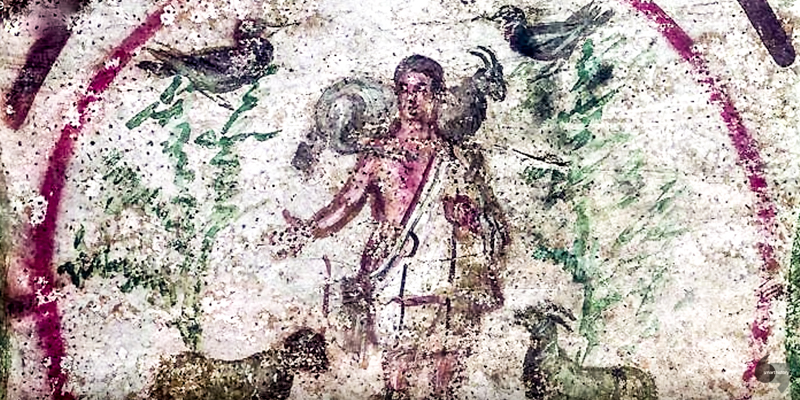