“Jubilee Church”: A modernist jewel on the outskirts of Rome

Designed in the late 1990s by American modernist archistar Richard Meier, it has been praised for encapsulating the spirituality of the “new millennium.”

Think of churches in Rome and the majestic beauty of St. Peter’s Basilica or the ancient charm of the Pantheon may come to mind. But in Rome’s outskirts, in a borough called Tor Tre Teste, lies one of the Italian capital’s best kept architectural secrets.

Built in the late 1990s, the Chiesa di Dio Padre Misericordioso (literally Church of God the Merciful Father) was designed by American modernist archistar Richard Meier, who created a ship-like building made of three large curved walls that look like sails and three vertical structures that look like the hull of a boat. 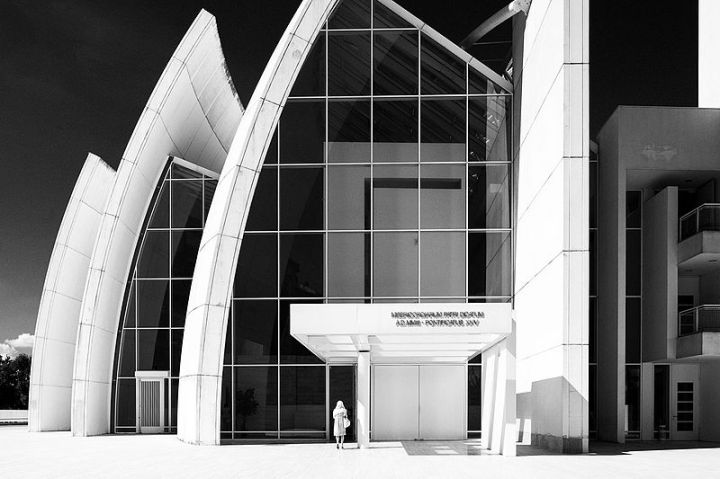 Meier had been previously selected as one of a group of five internationally renowned architects from around the world, including Santiago Calatrava and Frank Gehry, as part of a competition to identify the best architectural project to celebrate the Jubilee Year of 2000. The committee judged Meier’s modernist lines and his iconic use of white as a color for exteriors as the project that best encapsulated spirituality for the “new millennium.”

Meier’s love of white has to do with the way that the color encapsulates all other colors of the light spectrum. In his own words, the architect defined white as the best “absolute” color: “White is never just white because it’s always being transformed, by light and by changing atmospheric conditions like clouds, sunshine, moonlight.”

And indeed, according to Meier, it is light and its ability to change our perception of the physical world that allow us to perceive what is sacred. For this reason, the Jubilee Church, as his creation is often called, was designed in order to allow natural sunlight to flow seamlessly within the curved and square space of its interior. And the brightness of its white exterior was ensured thanks to the use of a mix of titanium oxide and crushed Carrara marble specifically designed for the occasion by Italian construction group Italcementi.

The use of three curved walls as sails is also rich in symbolic meaning: Meier envisioned the three sails as symbols for the Church and its ability to propel humanity into the third millennium. The three “sails” were built by painstakingly assembling 38 different cement blocks measuring up to 85.3-feet that were carefully positioned to recreate the geometry of a ship’s sails.

The holy space where Mass is celebrated was designed within a protective shell, a symbol of Divine Mercy after which the church is named. The shell is both protective yet open to the sky above, a symbol of its infinite quality.

And last but not least, the architect opted for a special coating material that is able to destroy pollution, a suggestion for a more sustainable future to be embraced as humanity makes it way into the third millennium.

The “Jubilee Church” can be reached by taxi (address: Piazza Largo del Terzo Millenio, 8) or public transport: take subway line C to the Torre Mauro station and then take bus 556.