Why are there labyrinths in some cathedrals?

It's not a New Age fad, that's for sure. They've been around since the 4th century.

Labyrinths are patterns that might not seem to belong to either Christian architecture or to the history of Christian decorative arts. Sure, we find ivy-inspired labyrinthine decorations both in Gothic column capitals and illuminated manuscripts, and some French and English gardens include some interesting, intricate mazes in them (although these are not found in religious contexts, to be sure) but nothing that might resemble proper Egyptian or Greek classic labyrinth, minotaur included or not, like those described by Herodotus, Pliny, or in mythology.

However, as always, there are exceptions to the rule. Some French cathedrals, like those of Amiens, Chartres, Reims, Saint-Quentin in Aisne, and Saint-Omer, are still relatively well known today because of their great pavement labyrinths. Even more, some non-medieval cathedrals (like Grace Cathedral in San Francisco, California, which seems to be following the design of the famous Chartres pavement) also feature labyrinths in their floors. The earliest labyrinth found in a Christian church is the 4th-century pavement in St. Reparatus’ Basilica, in Algeria. What is the meaning of labyrinths then, in Christian art and, more specifically, in cathedral floors?

Read more:
When Unicorns Go to Church: A Mosaic in St. John the Evangelist’s Basilica in Ravenna

The most widely spread explanation claims these labyrinths were originally used as symbolic allusions to the Holy City (Jerusalem), thus giving the labyrinth a spiritual meaning. Allegedly, these labyrinths served as substitutes for pilgrimage paths, thus considered symbolic “paths to the Holy Land.” Those who could not go on a pilgrimage to Jerusalem would walk these labyrinths, some even on their knees, while praying some specific devotions (like the stations of the Cross, for instance). Apparently, this kind of symbolic pilgrimage was practiced in Chartres in the 17th century, although there is little evidence supporting this claim beyond some 18th-century testimonies referring to these labyrinths as “Roads to Jerusalem” (“Chemin de Jerusalem”). Some other scholars argue these were used during the Holy Week, representing Christ’s harrowing of Hell, but there is no evidence supporting this claim either.

Most likely, there is a simpler, more straightforward explanation: the labyrinth pattern provided for clean, neat, elegant geometrical decoration for these buildings, no further meanings attached.

Take a look at the slideshow below to admire some of these beautiful decorative patterns in some of the greatest medieval cathedrals of Europe. 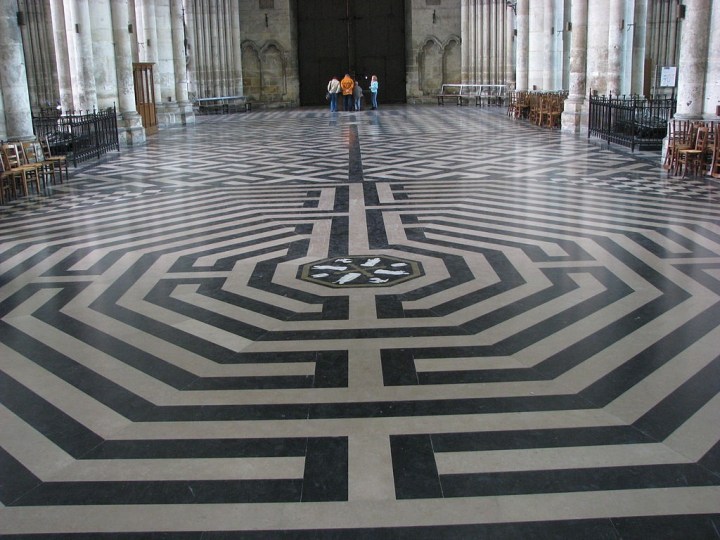