The part of new motherhood that no one ever talks about 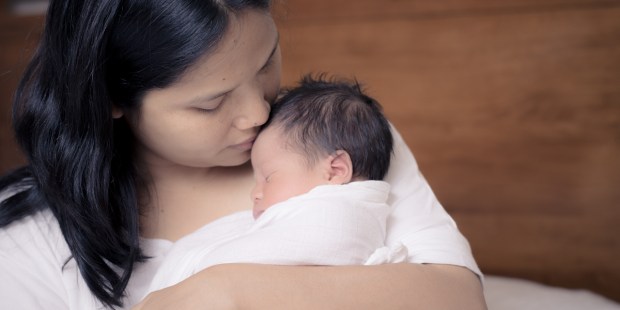 Why do do many new mothers struggle with this?

When my babies were little, I used to imagine scary things happening to them. Really scary — like the ceiling fan crashing down into their cribs and crushing them or heavy books falling off the bookshelves onto their heads. Having lived through a frightening bout of postpartum depression with my first baby, I knew that these unbidden mental images were very different in nature than the those that accompany PPD. But that didn’t help me shake the feeling that something was wrong with me. Was I paranoid? Overprotective? In the grip of paralyzing anxiety?

I didn’t get an answer to those questions until now. As it turns out, intrusive thoughts of harm coming to our babies aren’t unusual — and according to Today’s Parent, they’re something our brains are programmed to do:

Have you ever been waiting on a subway platform and thought, What if I jumped in front of the train? Or maybe you were driving down the road and for a brief second had a vision of veering into oncoming traffic. These flashes of weird, unexpected, and often uncharacteristic images and thoughts are pretty much universal according to experts. It’s the brain’s way of testing things out, identifying dangers, and keeping us safe. And parenthood is no different. In fact, “intrusive thoughts,” as they are called, tend to bloom in those early weeks and months of trying to keep a small human alive and well …

“I think on some level we are evolutionarily programmed to do this,” says Margaret Howard, PhD, professor of psychiatry and human behavior and medicine at the Alpert Medical School of Brown University in Providence, Rhode Island. “Back in prehistoric times, there were lots of dangers lurking, so I think there’s still a little part of our primitive brain that has that element of hypervigilance. What it speaks to is a mother’s recognition of the fragility of her new baby and also this primal urge that mothers have to protect and keep their offspring safe.”

Mothers of ages past absolutely had to be vigilant about their babies’ safety. Whether the threat came from wild animals, snakes hidden in brush, or potentially toxic plants, there were literally dangers around every corner. Dangers a lot more real than a securely installed ceiling fan or a sturdy bookshelf.

But it makes sense that in the absence of real danger, our brain would identify any perceived danger in an effort to keep doing what it’s learned to do through the millennia — keep us and our children alive. It’s kind of the same concept as the evolving theory on allergies. In the absence of genuine threats to our health, our immune systems go into overdrive, misidentifying benign influences (like peanuts or pollen) and sounding the alarm.

Luckily, our brains don’t act on autopilot the same way our immune systems do. We can recognize when intrusive thoughts are irrational, and usually we can turn those thoughts off with a good, solid reality check.

But there is a strong primal component of early motherhood, particularly the first time around. It isn’t always easy or even possible to turn off our brain’s persistent warning that our babies are in danger, even when we can easily recognize how implausible that danger is. That’s what I wish someone had told me when my babies were little — that’s it’s not insane to become so paranoid over a ceiling fan that you wake up every 20 minutes in a panic, certain your baby has been crushed. That sometimes the only thing to do in order to quiet your primal momma-bear brain is to move the crib so it’s not underneath the ceiling fan — even if it means rearranging the whole room. And that when you finally succumb to the compulsion to do so, you don’t have to feel ashamed or worry about the state of your mental health.

The truth is, you’re not crazy. Your brain is just trying to protect your baby from all threats, regardless of validity. And sometimes, buying your mind a little peace and quiet is worth rearranging the furniture.