From Bethlehem to the Jordan: What have we learned about humility? 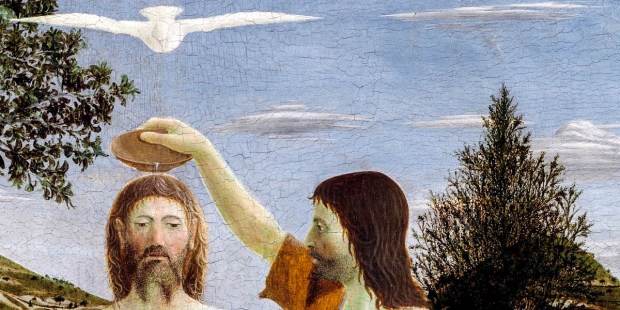 This Sunday concludes the liturgical season of Christmas, with a final lesson on self-emptying.

Meister Eckhart, a medieval Dominican, once wrote, “As the special function of the eye is to see form and color, and of the ear to hear sweet tones and voices, aspiration is specific to the soul. To stop aspiring is sin. This energy of aspiration directed to and grasping God … is called Hope, which is also a divine virtue. Through this faculty the soul acquires such confidence that she deems nothing in the Divine Nature beyond her reach” (Sermon 7).

We have a reason to hope because of the Incarnation. After all, this mystery of God becoming a human being—which we have celebrated this Christmas Season—is why St. Paul was able to write to Titus, “He saved us through the bath of rebirth and renewal by the Holy Spirit, whom he richly poured out on us through Jesus Christ our savior, so that we might be justified by his grace and become heirs in hope of eternal life.”

As the Magnificat antiphon for Evening Prayer II of the Solemnity of the Epiphany reminds us, this feast forms part of the Epiphany mystery—which includes the visit of the Magi, the Baptism of the Lord, as well as the Wedding at Cana—and helps us to understand more fully what has been revealed to us in the Christmas feast. This is why the Church also invites us to listen to the words of Isaiah the Prophet in our First Reading:

Thus says the Lord
Here is my servant whom I uphold,
my chosen one with whom I am pleased,
upon whom I have put my spirit;
he shall bring forth justice to the nations …
to open the eyes of the blind,
to bring out prisoners from confinement,
and from the dungeon, those who live in darkness.

To receive baptism is an act of humility and, in accepting John’s baptism, Jesus fully embraced what it means to be human, with all of humanity’s weakness, limitations, and suffering. This full embrace of the human condition is one of the reasons why Jesus is depicted as being nude in icons of the Baptism of the Lord—he has completely divested himself of divinity and glory to enter the waters shared by sinful women and men. That Jesus, the Son of God, humbled himself in this way shows that he chose humility as the way he would redeem us. The Savior of the world did not come with any sort of fanfare or grandeur. Instead, after spending 30 years in an obscure, out of the way village, he appeared quietly, in the company of sinners who were receiving John’s baptism of repentance.

Jesus never showed anything but the most profound compassion for those who were suffering. By accepting our humanity, and humbly embracing death, Jesus shows us how much God loves us: “In the four accounts of Jesus’ life and death [i.e. the Gospels] you can see very clearly that the more conscious he becomes of the mission entrusted to him by the Father, the more he realizes that the mission will make him poorer and poorer. He has been sent not only to console poor people, but also to give this consolation as one of them himself” (Henri Nouwen, Letters to Marc about Jesus).

Through our own baptism, we have been united with Christ and have been lifted up above our broken human nature, to become sharers in God’s divine nature.

What does the baptism of Jesus teach you about humility?

What gifts have you received from God during this Christmas Season?

How will you carry the Christmas and Epiphany mysteries with you into the coming weeks of Ordinary Time?

Words of Wisdom: “And we saw in faith and miracles his glory in many revelations of heavenly miracles. He was without sin and did not open his mouth to deceit, or for the revenge of anger, or for any storm of the flesh by which the human is shaken. Glory as of the only begotten Son from the Father, as this glory was like that of an only begotten son, whom a father loves very much and to whom he gives great glory, so that henceforth, there will be no such son. For just as God created no human but one from dust, for that reason the second  Adam is from God.”—St. Hildegard of Bingen, Homily 9—The Lord’s Baptism