Separated at birth, twin sisters end up in the same convent! 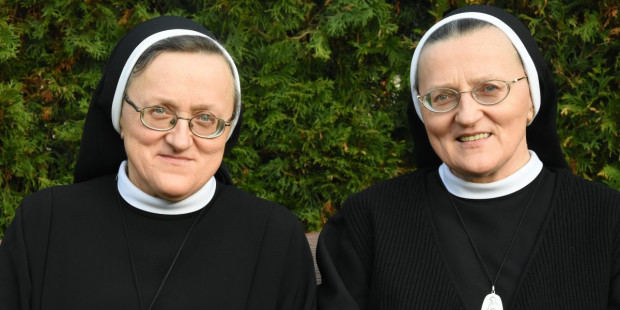 Elizabeth and Gabriela both found themselves in the convent of the Sisters of St. Elizabeth: “We think that our mother worked from heaven for our vocation.”

On February 23, 1962, Cecilia gave birth to twin girls. However, she never had the chance to meet them; she died in childbirth, from complications related to her Caesarean section. Faced with this dramatic situation, the family had no other choice than to separate the twins. One would be raised by the father, while the other would be taken in by the deceased mother’s sister.

The peculiarities of the way it was managed meant that the two sisters were officially registered as cousins. Since Elizabeth and Gabriela lived in neighboring towns, they went to the same school. They were often seated side by side, in the first row, because of the vision problems that both suffer. They understood each other very well, they loved to play together, and they often chose the same activities. Their common tastes extended to the way they dress: they often ended up choosing the same shoes or dresses.

The two sisters preferred religion classes and spiritual retreats to going on trips to the country with their friends. On All Souls Day, they showed the same devotion to the tradition of visiting cemeteries. And every year, each of them went with their family to pray at the tomb of a certain “Aunt Cecilia,” without either knowing that she was their deceased mother.

Throughout their childhood, Elizabeth and Gabriela often heard people say, “They’re cousins, but they seem more like twins!” One day, at the age of 10, Gabriela accidentally overheard a family conversation and discovered the secret of her own birth. A short time later, Elizabeth heard the news, on the day of her first communion. They described what happened:

“Life in the countryside is beautiful, except for the fact that people talk a bit too easily … Certainly, it was a terrible shock for both of us, even though we understood that our parents’ intentions were good, and that we were deeply loved.”

As adolescents, the twins participated regularly in prayer groups directed by the sisters of the religious congregation of the Hospitaller Sisters of St. Elizabeth. Both felt the call to religious life. The twins discussed it a lot between themselves. Attracted by the congregation’s spirituality, they eventually decided to enter the Sisters of St. Elizabeth together. The date was set; the only thing left was the delicate moment of announcing the news to their respective parents.

For Elizabeth, things went very well. Her father (the biological father of the twins) gave her his blessing. For Gabriela, the opposite happened: furious, her father took away her ID card and forbid her to leave the house. A year and a half later, Gabriela came up with a plan to be reunited with her sister in the convent. Under the pretext of going to visit Elizabeth for her birthday, she prepared everything to move there permanently … to Elizabeth’s great joy, but at the cost of breaking off all relations with her parents for a few years.

Then began a time of grace for the two sisters. It was a time when they were finally together and could walk towards Christ side by side. Five years later, the two were ready for their perpetual vows. Gabriela’s parents showed up in the company of the parish priest: they finally accepted her decision and gave her their blessing. Everyone was overcome with emotion.

For Elizabeth and Gabriela, it couldn’t be any other way:

“When our mother died, one of the sisters of our religious community was holding her hand. We think that our mother worked from heaven for our vocation. This way of being reunited, this shared path as novices and postulants in our vocation, is her most beautiful gift, a gift sent from heaven.”