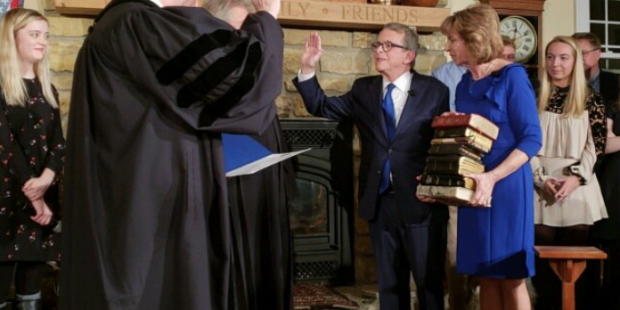 Gov. Mike DeWine took the oath of office while his wife held the nine family Bibles.

Governor Mike DeWine apparently takes the expression “swear on a stack of Bibles” quite literally. At midnight on January 14 he was officially sworn in as Governor of Ohio while placing his hand on a stack of nine family Bibles held by his wife Fran DeWine.

According to USA Today, the governor and first lady, who are practicing Catholics, wanted a Bible to represent each of their eight children. The couple’s son, Ohio Supreme Court Justice R. Patrick DeWine, swore in the governor.

During a short ceremony this morning at my home in Cedarville, I took the oath of office to become the 70th Governor of #Ohio. I was honored that my son @PatDeWine administered the oath as I placed my hand atop nine family Bibles held by my wife, First Lady @FranDeWine. pic.twitter.com/WKSTVdOy64

Each Bible holds a place in the DeWine family history. Here is the list provided by DeWine’s office: