Catholics told not to offer Sign of Peace during flu outbreak 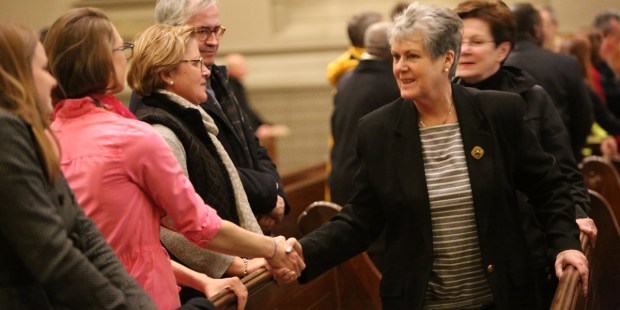 In light of a rampant outbreak of influenza, some U.S. Catholics are being advised not to shake hands during the sign of peace during Mass.

The Diocese of New Mexico and the Diocese of Allentown, Pennsylvania, have issued directives advising Catholics to avoid physical contact with each in light of widespread flu activity reported by the Center for Disease Control.

In New Mexico, where four people have died since the flu season began, the Archdiocese of Santa Fe advised Catholics to “simply nod your head and avoid bodily contact” during the Sign of Peace. The directive also advised that Catholics refrain from holding hands during the Our Father, and noted that Holy Communion will only be offered in the form of the Consecrated Host, not by the Chalice of consecrated wine.

Parishioners were also advised to stay home rather than come to Mass if they were experiencing any symptoms, such as sneezing or coughing.

“You are welcome to take advantage of the Sunday TV Masses which are available in English and Spanish. It is not a sin to miss Mass on Sundays if you are ill,” read the press release.

In the diocese of Allentown, Pennsylvania, where flu activity was reported to be “widespread,” church officials announced that they would suspend the Sign of Peace altogether, and forgo offering the Chalice at Communion as well.

While officials report an increase in the number of people coming into the emergency room for the flu, the good news is that this year’s predominant strain, H1N1, is easier to prevent, according to Pennlive.com. The flu vaccine is about 60-65 percent effective, compared to last year’s deadline H3N2 strain in which the vaccine was only 30-40 percent effective.

According to a CDC report issued last Friday, between 6 and 7 million Americans have reported flu symptoms, and up to 83,500 have been hospitalized so far this year.