The word Abba is like a recording of Jesus’ voice, says pope 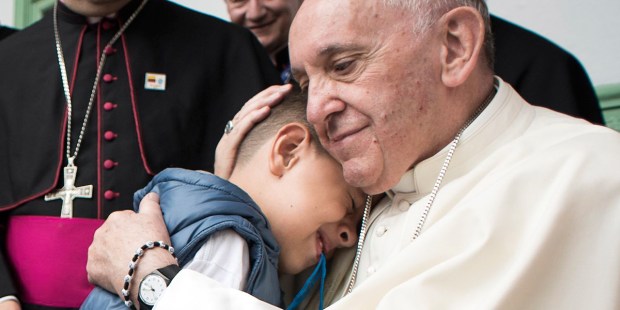 If we pray with this word, and the trust it implies, it’s like having all of Jesus’ world poured into our hearts

Christian prayer can be condensed in a single word, Pope Francis suggested at the Wednesday audience, the word “Abba.”

Continuing with his teaching on the Our Father prayer, the pope spoke about how this word, preserved in Aramaic in the Scriptures, gives us, as it were, Jesus’ very voice.

It is rare in the New Testament for the Aramaic expressions not to be translated into Greek. We must imagine that in these Aramaic words, the very voice of Jesus Himself remains as if “recorded”: They have respected Jesus’ language. In the first word of the Lord’s Prayer we immediately find the radical newness of Christian prayer.

After having known Jesus and listened to His preaching, the Christian can no longer consider God as a tyrant to fear; he is no longer afraid but rather feels trust in Him flourish in his heart: He can speak to the Creator, calling Him “Father.”

The pope suggested that the word is more than just a link to the figure of a father. It is about having “all of Jesus’ world poured into our heart,” he said.

With the heart we are invited to say ‘Papa,’ to have a relationship with God like that of a child with his father, who says ‘Papa,’ and says ‘Dad.’ Indeed these expressions evoke affection, […[ the image of a child completely wrapped in the embrace of a father who feels infinite tenderness for him.

The Bishop of Rome spoke about how the context of the Gospels helps us to understand the real sense of this word. Imagine, for example, he said, the Prodigal Son using it.

Pope Francis reflected that the father of the prodigal son reminds us of a mother, as it is “above all mothers who excuse their children, who cover up for them, whose empathy towards them is uninterrupted, who continue to love them even when they no longer deserve anything.”

“God is not only a father; He is like a mother who never ceases to love her creature,” the pope affirmed.

It may be also that we find ourselves walking on paths far from God, as happened to the prodigal son; or that we fall into a solitude that makes us feel we are abandoned in the world; or even to have made a mistake and be paralyzed by a sense of guilt.

In those difficult moments, we can still find the strength to pray, starting from the word “Father,” but said with the tender meaning of a child: “Abba,” “Papa.” He will not conceal His face from us.

Remember this well: Perhaps someone has ugly things within themselves, things they do not know how to resolve, great bitterness for having done this or that… He will not conceal His face. He does not close up in silence. If you say “Father” to Him, He will answer you. You have a father. “Yes, but I am a delinquent…”. But you have a father Who loves you!

Say “Father” to Him, start praying in this way, and in the silence He will tell you that He has never lost sight of you. “But, Father, I have done this” …

“I have never lost sight of you. I have seen everything. But I have always remained there, close to you, faithful to my love for you.” That will be the answer. Never forget to say “Father.”

Read more:
Hymn of the week: “Eternal Father, Strong to Save”