Exclusive photos: A march unlike any other

Surprises on stage, and in the length of the almost never-ending line of people.

As the cold, dreary morning dawned on Washington, DC, few realized that history was about to be made. The wet slushy ground and the heavy clouds made for an ominous backdrop to the 46th annual March for Life, coupled with reports of broken-down buses and unexpected delays, but today was to be a day of surprises …

First a trickle of hardy souls arriving at the Mall, having snowball fights and making snowmen as young folks do. Then a slow but steady swell in front of the imposing stage, spreading outwards until the surrounding streets became all but impassable.

The deafening sound of joyful solidarity could be heard all the way up to the Supreme Court, as the thunderous chant of “We love babies, yes we do! We love babies, how ‘bout you!” resonated through the corridors of power in the nation’s capital.

Vice-President Michael Pence and his wife Karen showed up on the stage to rally those speaking for the defenseless — to the surprise of even some of the event organizers.

Archbishop Joseph F. Naumann, archbishop of Kansas City, Kansas, and chairman of the bishops’ Committee on Pro-Life Activities — he had celebrated the Prayer Vigil and Mass for Life at the Basilica of the National Shrine of the Immaculate Conception the evening before — along with March for Life President Jeanne Mancini made their way to the banner to lead the march up Constitution Avenue. The procession started 45 minutes late due to the immensity of the crowds.

But the real surprise was the traffic jam that had occurred a few blocks away: a tangle caused by an unprecedented number of buses. Buses that kept coming and coming. Buses that didn’t bring the estimated 100,000 marchers, which event organizers had expected and planned for.

These buses not only brought double the number, but triple, making the crowd well over 300,000 — possibly the largest March for Life in history and a march unlike any other. 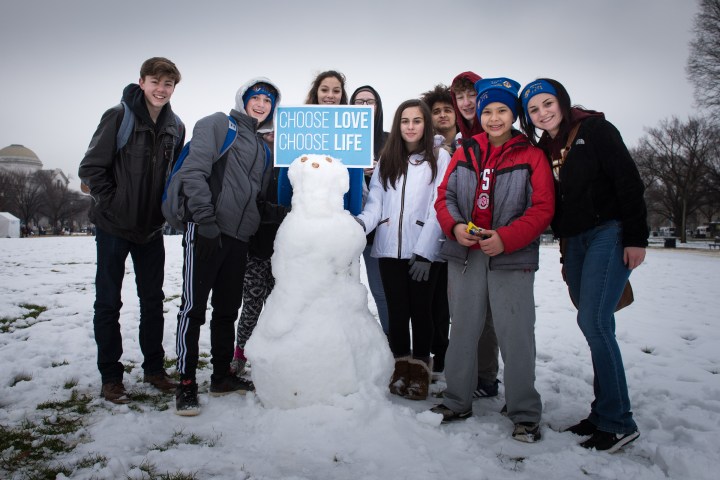