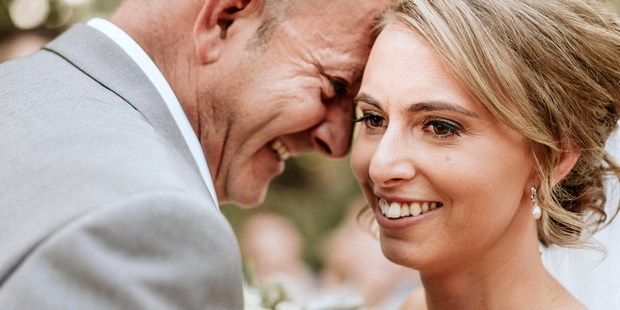 James Day went to extraordinary lengths to ensure one bride could feel all the love surrounding her wedding day.

Brides often dedicate a significant part of their wedding budget on photos, so over the course of their lives they can look back and smile at their special day. Yet, for brides with visual impairments, it’s tricky for photographers to capture those magical moments in a way the bride can fully appreciate. So when one Australian photographer, James Day, was challenged to record the day for a totally blind bride, he deliberated for over a year to come up with a solution.

As he explained on his Facebook post, he played the day “a thousand times” in his mind to come up with the best solution possible. “I reminded myself that ultimately, it’s my job to remind people of the love that exists in their life; sometimes that happens by handing someone a photograph and sometimes it happens in another way entirely.”

Steph Agnew went blind four years ago due to Cone-Rod Dystrophy, a degenerative disease that saw her eyesight worsen over the years — going from blurry to what she considers like the black and white static we see on the television. With the 31-year-old limited to seeing “complete and utter fuzz” she was worried she’d miss out on being able to fully appreciate her wedding to fiancé Rob Campbell.

Luckily for the couple, Day came up with an ingenious way to record the day, which would allow Agnew to soak up the atmosphere and sights and smells of the day. Day, with the help of videographers Toni-Jo and Shaun from Lemon Tree Film House, came up with a fully tactile and immersive album, including fabrics, perfumes, and raised images.

By running her fingers through her album, Agnew would be able to feel out the outline of people in her photos thanks to raised dots. She’d be able to feel how she and her husband stood as they exchanged their vows. And thanks to the use of fabric mounts, she’d also be able to feel the different materials associated with the day, such as the pattern on the dress worn by her mom Linda, who also suffers from the same condition.

To help further trigger memories, Day, along with Agnew’s brother, Callum, decided to appeal to the bride’s sense of smell through the use of essential oils that could be associated with different parts of the day. Between the fabric swatches and different smells, Agnew would be treated to a “distinct sensory footprint” of her day, while her groom would still be able to see the pictures.

Day told the bride his aim was “to create a mesh of details between your family and all the relationships present on the day. Between it all, it will paint the clearest picture and take you back.” With such a beautifully thought out album he seems to have surpassed himself.

As for the bride: “I wish sighted people could learn to be more appreciative for what they’ve got. I think so many people take things for granted, like sight for instance. Even though I don’t have sight, I’m not breakable, I’m not made of glass and that you can overcome any adversity,” she told Mamamia.

If you’d like to see the video of the happy couple’s wedding day in 2018, click on this link to see what Lemon Tree Film House layered together to help Agnew get a real feel for her marriage, while also explaining the bride’s story.