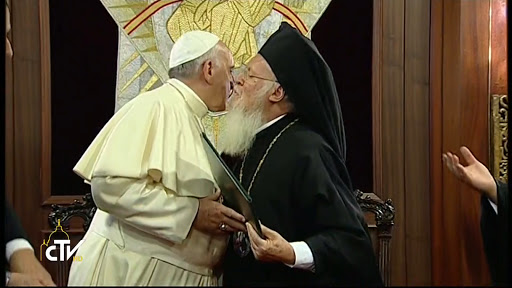 “It is easy to forget the fundamental equality existing among us”

Here is Pope Francis’ homily from today’s celebration of Vespers, and the beginning of the Week of Prayer for Christian Unity.

Today marks the beginning of the Week of Prayer for Christian Unity, in which all of us are asked to implore from God this great gift. Christian unity is a fruit of God’s grace, and we must dispose ourselves to accept it with generous and open hearts. This evening I am particularly pleased to pray together with representatives of other Churches present in Rome, and I offer them a fraternal and heartfelt greeting. I also greet the ecumenical delegation from Finland, the students of the Ecumenical Institute at Bossey, who are visiting Rome to deepen their knowledge of the Catholic Church. My greeting also goes to the young Orthodox and Oriental Orthodox students sponsored by the Committee for Cultural Collaboration with Orthodox Churches of the Council for Promoting Christian Unity.

The Book of Deuteronomy sees the people of Israel encamped in the plains of Moab, about to enter the land that God promised them. Here Moses, as a kind father and the leader appointed by the Lord, repeats the Law to the people, and instructs and reminds them that they must live with fidelity and justice once they have been established in the Promised Land.

The passage we have just heard shows how to celebrate the three main feasts of the year: Pesach (Passover), Shavuot (Weeks), Sukkot (Tabernacles). Each of these feasts requires Israel to give thanks for the good things received from God. The celebration of a feast calls for everyone’s participation.  No one is to be excluded: “And you shall rejoice before the Lord your God, you and your son and your daughter, your manservant and your maidservant, the Levite who is within your towns, the sojourner, the fatherless, and the widow who are among you, at the place which the Lord your God will choose, to make his name dwell there” (Deut 16:11).

Each of these feasts requires a pilgrimage to the “place that the Lord will choose, to make his name dwell there” (v. 2). There the faithful Israelite must come before God. Though the Israelites had been slaves in Egypt, lacking personal possessions, they are not to “appear before the Lord empty-handed” (v. 16); the gift of each is to correspond to the blessing received from the Lord. In this way, all will receive their share of the country’s wealth and will benefit from God’s goodness.

It should not surprise us that the biblical text passes from the celebration of the three principal feasts to the appointment of judges. The feasts themselves exhort the people to justice, stating that all are fundamentally equal and all equally dependent on God’s mercy. They also invite all to share with others the gifts they have received. Rendering honour and glory to the Lord in these yearly feasts goes hand in hand with rendering honour and justice to one’s neighbour, especially the weak and those in need.

The Christians of Indonesia, reflecting on the theme chosen for this Week of Prayer, decided to draw inspiration from these words of Deuteronomy: “Justice, and only justice, you shall pursue” (16:20). They are deeply concerned that the economic growth of their country, driven by the mentality of competition, is leaving many in poverty and allowing a small few to become immensely wealthy. This jeopardizes the harmony of a society in which people of different ethnic groups, languages and religions live together and share a sense of responsibility for one another.

But that is not simply the case in Indonesia; it is a situation we see worldwide. When society is no longer based on the principle of solidarity and the common good, we witness the scandal of people living in utter destitution amid skyscrapers, grand hotels and luxurious shopping centres, symbols of incredible wealth. We have forgotten the wisdom of the Mosaic law: if wealth is not shared, society is divided.

Saint Paul, writing to the Romans, applies the same thinking to the Christian community: those who are strong must bear with the weak. It is not Christian “to please ourselves” (15:1). Following Christ’s example, we are to make every effort to build up those who are weak. Solidarity and shared responsibility must be the laws that govern the Christian family.

As God’s holy people, we too constantly find ourselves on the threshold of entering the Lord’s promised kingdom. Yet, since we are also divided, we need to recall God’s summons to justice. Christians too risk adopting the mentality known to the ancient Israelites and contemporary Indonesians, namely that in the pursuit of wealth, we forget about the weak and those in need. It is easy to forget the fundamental equality existing among us: that once we were all slaves to sin, that the Lord saved us in baptism and called us his children. It is easy to think that the spiritual grace granted us is our property, something to which we are due, our property. The gifts we have received from God can also blind us to the gifts given to other Christians. It is a grave sin to belittle or despise the gifts that the Lord has given our brothers and sisters, and to think that God somehow holds them in less esteem. When we entertain such thoughts, we allow the very grace we have received to become a source of pride, injustice and division. And how can we then enter the promised kingdom?

The worship befitting that kingdom, the worship demanded by justice, is a celebration that includes everyone, a feast in which gifts received are available to and shared by all. To take the first steps towards the promised land that is our unity, we must first of all recognize with humility that the blessings we have received are not ours by right, but have come to us as a gift; they were given to be shared with others. Then, we must acknowledge the value of the grace granted to other Christian communities. As a result, we will want to partake of the gifts of others. A Christian people renewed and enriched by this exchange of gifts will be a people capable of journeying firmly and confidently on the path that leads to unity.

Read more:
Do changes for Ukraine’s Orthodox Church mean unity with Catholics is on the horizon?