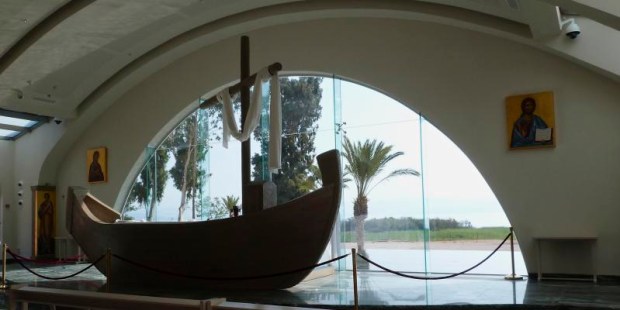 “He got into one of the boats, the one belonging to Simon, and asked him to put out a little from shore. Then he sat down and taught the people from the boat.”

“He walked upon the Sea of Galilee (…) Shouted far and wide, he calmed the raging tide,” Johnny Cash’s well-known song “He turned the water into wine” goes. It is clear one cannot think of biblical Galilee without thinking of the Kinneret, the lake better known as the Sea of Galilee (or Lake Tiberias, or Lake of Gennesaret), the lowest freshwater lake on Earth, fed not only by underground springs but mainly by the Jordan River, which flows through this lake from north to south.

Jesus spent most of his ministry here, in Galilee. It is only natural pilgrims from all over the globe have visited the region since the early days of Christianity. But for a little over a decade, pilgrims have been able to stay in Magdala in a unique retreat center.

It was in 2004 when Juan M. Solana, director of the Pontifical Institute Notre Dame of Jerusalem Center, a guest house for Christian pilgrims, built a retreat center in the region. Fr. Solana’s plan was to knock down some holiday cabins from an old beach resort and build the retreat, including a restaurant and a spirituality center. By 2009, when the construction was about to begin, they ran a routine excavation of the site, which is a requirement in the region.

Less than two feet below the surface, diggers struck something hard: a stone now known as the Magdala Stone, a stone bench that was part of a first-century synagogue, one of only seven from the Second Temple period known to exist, and the first to be found in the Galilee region. It is also the first synagogue excavated from the time of Jesus in a place where we know from Scripture that He actually walked and taught. In fact, as Zoe Romanowsky explains in this article, “local coins found in a side room of the synagogue were dated from the year 29—when Jesus would likely have been active in His ministry.”

The “Boat Chapel” is now part of one of the main buildings of the Magdala Center, the Duc in Altum, an ecumenical worship place that draws its name from Luke 5:4. In the passage, Jesus tells Peter to “launch into the deep” (“duc in altum,” in Latin) and let down the net for a (miraculous) catch. Here, in the Duc in Altum, we find the unique Boat Chapel. With a view of the sea of Galilee, the boat-shaped altar in this chapel commemorates not only the miraculous catch, but Jesus’ preaching from the boat, as read in the very same passage of the Gospel of Luke: “One day as Jesus was standing by the Lake of Gennesaret (Sea of Galilee) the people were crowding around him and listening to the word of God. He saw at the water’s edge two boats, left there by the fishermen, who were washing their nets. He got into one of the boats, the one belonging to Simon, and asked him to put out a little from shore. Then he sat down and taught the people from the boat”.

During his visit to the Holy Land in 2014, Pope Francis blessed the tabernacle of this chapel.