Thea Bowman might be on her way to sainthood. Here’s what she said about MLK 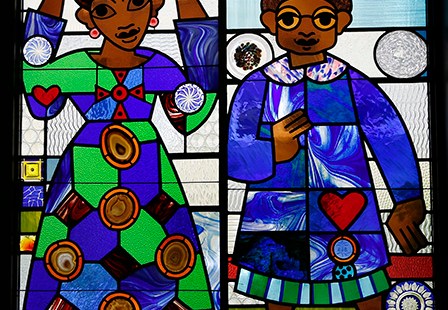 The Franciscan sister and educator wrote and spoke extensively on living in harmony and understanding each other.

In November, the bishops of the United States voted in favor of supporting the cause for canonization of Sr. Thea Bowman, a religious member of the Franciscan Sisters of Perpetual Adoration based in La Crosse, Wisconsin.

You can read about Sr. Thea’s amazing life here.

Here we share with you excerpts from a reflection that she wrote in 1978, on the 10th anniversary of the assassination of Martin Luther King, Jr.

The reflection was published in the La Crosse Times. [Ed. note: The reflection uses words to describe certain groups of people that are no longer acceptable, but which were common at the time.]

April 4, 1978. I said to my friend, “That’s the 10th anniversary of the death of Martin Luther King. All blacks on campus will wear black,“ I said.

“Of course. Why not? I’m wearing green today, and I’m more American than Irish. I’m only three-fourths Irish, and I’m born American. Martin Luther King means more to me than St. Patrick. Martin Luther King doesn’t just belong to black people. He belongs to America, and I can wear black to mourn his passing if I want to.”

It made me think.

My Irish friend (three-fourths, that is) saw King’s dream not as a dream for one race or people but as one man’s interpretation of a Constitutional imperative, as one man’s ringing enunciation of the American dream.

It made me remember. Black and white together marching in Montgomery, Selma, Washington, and Jackson. People, black, white, red, brown, yellow, working together.

The alienated and dispossessed, refugees who take jobs that could be filled by Americans, children who get in the way; the retarded, the slow, the sick, the unwanted; the Irish (if you don’t like them). Italians (if you don’t understand them).

Those who because they do not think like we do, work like we do, pray like we do, live where we do, love like we do are cramped, confined, discredited, shut out, hemmed in, rejected or ignored, the millions who because they are somehow different are denied (in ways both large and small) the basic right to life, liberty and the pursuit of happiness which our Constitution seems to guarantee. “Now,” said Martin, “now is the time to make real the promise of democracy … Now is the time to make justice a reality for all God’s children.” I have a dream. We have a dream of an America where all the boys and girls and men and women and their countless generations can be free.

Why? It will remind you and me that the dream has not yet become reality, that we have work to do. It will signify a recommitment under God to freedom and justice for all.

It will signify a willingness to work, to struggle, even to suffer to hasten that day when all God’s children red, brown, black, white, and yellow, no longer despised or rejected, dispossessed or set apart, may become: One nation, indivisible, with liberty and justice for all.

This ran under the headline “Dream Is Fading But Isn’t Dead” in the La Crosse Times Review, in April of 1978.

It is republished in Thea’s Song: The Life of Thea Bowman.