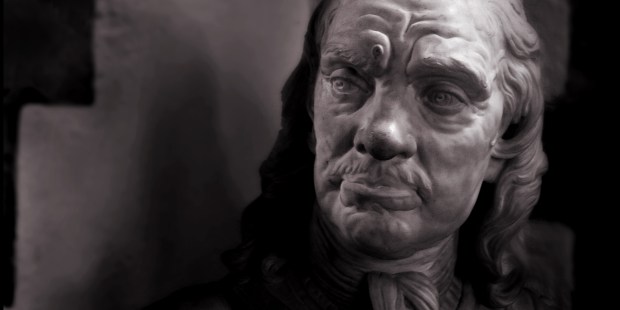 The “Lord Protector” has been blamed for devastation in Ireland and the deaths of thousands of Catholics.

In lands of the former Soviet Union, statues of Lenin and Stalin have been toppled. In America, monuments honoring Confederate war heroes have been attacked, and a statue of St. Junipero Serra in Congress has been the target of an indignant lawmaker.

And in England, there is the case of the revolving bust of Oliver Cromwell.

Cromwell was the “lord protector” who oversaw the governance of England, Scotland and Ireland following the English Civil War, Smithsonian magazine wrote. But he is also known for “his brutal conquest of Ireland during the mid-1600s … vilified as a ruthless war criminal responsible for the deaths of thousands of innocent Catholics,” the magazine said.

A bust depicting him has sat quietly in a stairwell near the Members’ Tea Room for quite some time.

Until 2017. It was in autumn of that year that Members of Parliament noticed that the bust was facing the wall. Someone set it aright, but repeatedly, members would find it facing the wrong direction.

Finally, officials put a cordon around the bust, with a sign warning of its fragility. That didn’t help.

Who was the mysterious statue-turner? Turns out it was Labour Member of Parliament Stephen Pound, a Catholic who represents Ealing North and is shadow minister for Northern Ireland.

After the statuary back and forth continued, Parliament officials upped the ante by moving the bust—right outside Pound’s private office. Smithsonian reported:

The move, reportedly sparked by “health and safety concerns,” was accompanied by a stern warning from a Commons spokesperson, who told press that “individuals on the parliamentary estate are asked not to touch any statues, paintings or other works of art on display, due to the risk of damage to the artworks.”

Commons officials also installed an alarm on the controversial bust, likely in hopes of deterring those with anti-Cromwell sentiments from further tampering with the likeness.

Pound, however, remains committed to the cause, wryly telling James Tapsfield of the Daily Mail, “I don’t know about health and safety, but [Cromwell] had better watch out for his health and safety.”

“The butcher turned up on my doorstep,” an indignant Pound told the Mail. (Cromwell is known in Ireland as “the butcher of Drogheda,” after he carried out one of the worst massacres on Irish soil.) “I am in negotiations with the authorities. His butcher stare gets me every morning when I come in.”