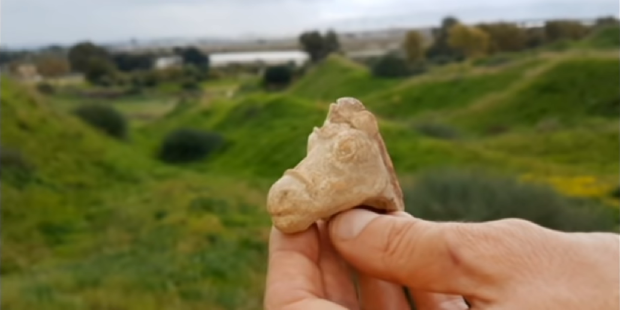 IAA implores all those who discover such finds to turn them over to the authorities.

While out on a hike and a mission to find mushrooms in the area of Kfar Ruppin, archaeologist Ayelet Goldberg-Keidar and her two daughters were surprised to discover a small 2,800 year-old horse-shaped clay figurine. The ancient find made its way to the surface with the help of driving rain storms, which displaced soil enough to reveal another piece of Israel’s history.

The archaeologist’s daughters, Hadas and Maya, were the ones to spot the small ornamental piece of ancient pottery, but unfortunately, the Times of Israel reports, they did not find any mushrooms.

Ayelet commented, “We were very excited. It’s a fascinating find and spectacularly beautiful.” She added, “I immediately recognized it was an ancient figurine from the Iron Age – the period of the Kingdom of Israel.”

This newfound clay figurine was discovered not long after a different clay horse head was uncovered near the seaside site of Tel Akko. This piece — only 2,200 years-old, from the Hellenistic period — is depicted with a harness and mane, suggesting the horse may have had a rider.

Nir Distelfeld, of the Israel Antiquities Authority Theft Prevention Unit, explained that the rainy season of Israel often brings to light hidden pieces of history. In December, 2017, Goldberg-Keidar and daughter Hadas were on a similar nature walk when they discovered an intact clay lamp at Kibbutz Nir David. The lamp had been commandeered by a porcupine as a makeshift home.

“Porcupines prefer archaeological sites because the earth is less packed due to man’s activities in the past,” Distelfeld explained. He then implored those who find such artifacts to turn them over to the IAA in order to “help put together the pieces of our historical puzzle.”

The horse figures are being studied by University of Haifa archaeologist and art historian Dr. Adi Erlich, whose examination has already yielded a wealth of information. In the IAA press release, Erlich noted that such depictions of horses were common in the first millennium BC, or the Iron Age. From the details of eyes, ears, hair, harness, and even red stripes which are only faintly discernable, she was able to place it between the 7th and 9th centuries BC.

“It should be noted that in our region, almost always men were depicted in figurines as riding horses, while women were carved in the context of fertility, motherhood, and sexuality, which attests to gender roles in society during the Iron Age,” Erlich said.

Take a look below to see the horse-head discovered at Tel Akko and, about halfway through, the one discovered by the Goldberg-Keidar family.