This Sunday, draw up to the table of God’s Word, as those in the Nazareth synagogue did 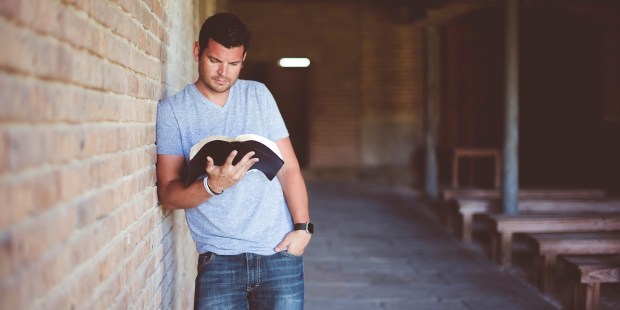 “The eyes of all were fixed on him!” How much I wish that this assembly gave such testimony …

He came to Nazareth, where he had grown up,
and went according to his custom
into the synagogue on the sabbath day.
He stood up to read and was handed a scroll of the prophet Isaiah.
He unrolled the scroll and found the passage where it was written:
The Spirit of the Lord is upon me,
because he has anointed me
to bring glad tidings to the poor.

In the years prior to the liturgical reforms of the Second Vatican Council, the Word of God was included in the various rites of the Church—obviously including the Mass and the Divine Office—but very little of the Bible was proclaimed within these liturgies and, of course, it was proclaimed in Latin. To help highlight the significance of the Word of God within the liturgy, priests were eventually given the option of reading the Scriptures in the vernacular at the beginning of the homily and missals were made available, providing translations of the selected texts.

Even with these innovations, only 22 percent of the Gospels (primarily Matthew), 11 percent of all other New Testament texts, and 0.8 percent of Old Testament texts were proclaimed in the Church’s liturgies. This is why one of the most significant reforms of the Council was to decree that, “The treasures of the bible are to be opened up more lavishly, so that richer fare may be provided for the faithful at the table of God’s word” (Sacrosanctum Concilium, no. 51).

More recently, the General Instruction of the Roman Missal reflects, “In the readings, the table of God’s Word is spread before the faithful, and the treasures of the Bible are opened to them … for by them the unity of both Testaments and of salvation history is brought out.” (no. 57).

The Council’s invitation to celebrate the Word of God more richly and fully in the liturgy isn’t a new idea, because proclamation of the Word of God has been an essential element of our faith tradition. This is especially true when we consider the Jewish roots of our liturgies and the understanding of how God is revealed in Scripture.

The power of this proclamation could be seen as a dominant theme running through the Liturgy of the Word for this Third Sunday in Ordinary Time.

In our First Reading, we have the priest-scribe Ezra proclaiming the Law to the people for the first time since their return from exile in Babylon. Standing on a raised platform, Ezra holds the scroll of the Law before the people, who stood up as an act of reverence. The people weep with joy at hearing God’s Word again—perhaps there were also tears of sorrow at what had been lost during the exile—and Nehemiah proclaims a time of celebration: “Acknowledging the power of God and remembering the greats of divine mercy should be a cause for joy” (Thomas M. Bolin, Ezra, Nehemiah).

In a similar way, St. Luke recounts the beginning of Jesus’ ministry in Galilee and his visit to the synagogue in Nazareth. He took the role of the lector in the synagogue service and selected words from the Prophet Isaiah (61:1-2) that offer a summary of the ministry of healing and reconciliation he is about to begin.

This first scene from Jesus’ ministry in Luke’s Gospel prepares the reader or listener for what is to come in the remainder of the Gospel. Besides offering new understandings to his audiences, Jesus will free people from bondage (e.g. to demons) and restore meaning to people’s lives by healing them. It is for this total ministry that the Spirit has anointed Jesus.

In a very real way, the texts of our liturgy are inviting us to reflect on the power of God’s Word. In Nehemiah, the proclamation of the Word reminds the people of who God is and of the ways God has blessed them throughout their history. The Word helps them rediscover their identity as God’s Chosen People.

In the passage from St. Luke, we are reminded that Jesus is the fulfillment of the promises made through the prophets and the fullness of God’s revelation. This revelation is renewed for us and within us each time we gather together and receive God’s Word, as we are reminded of what and whose we are and what we are called to become.

How important is the Liturgy of the Word for you? How do you prepare to receive the Word of God within the Mass and the Church’s other liturgies?

When has the proclamation of the Word of God touched you in a particular way?

How do you experience the healing and forgiving love of Jesus?

Words of Wisdom: “When Jesus had read this passage, he rolled up ‘the scroll, gave it to the servant, and sat down. And the eyes of all in the synagogue were fixed on him’ … Blessed is that congregation of which Scripture testifies that ‘the eyes of all were fixed on him!’ How much I wish that this assembly gave such testimony. I wish that the eye of all (of catechumens and faithful, of women, men, and children)—not the eyes of the body, but the eyes of the soul—would gaze upon Jesus. When you look to him, your faces will be shining from the light of his gaze.”—Origen, Homilies on the Gospel of Luke 32

Read more:
If the Holy Spirit is your teacher, here is his textbook