Does Bill Murray do what he does because of his Catholic faith? 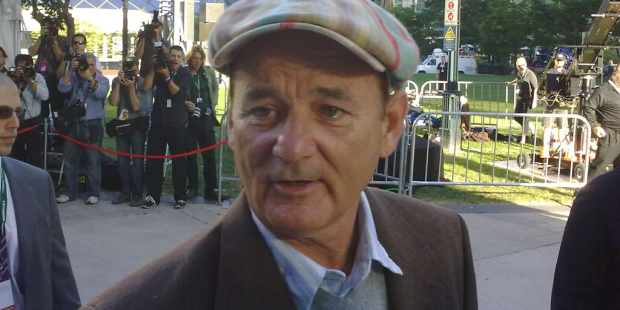 The actor has become famous for showing up with seemingly no motive greater than bringing smiles to the faces of strangers.

Bill Murray has garnered a lot of public appeal with his off-screen antics in the last decade. The famed movie star has a habit of turning up where you’d least expect him, always ending his impromptu appearances with a cryptic, “No one will ever believe you.”

We recently talked about an instance where he gifted David Letterman with a Christening gown, but his good natured meddling extends to more than just other celebrities. Murray has been known to photo bomb engagement parties and hop behind a bar to serve drinks, with seemingly no motive greater than bringing smiles to the faces of strangers.

No one is really a stranger to Bill Murray, however, as he is welcomed in all of these events with open arms. In fact, so many people have had these random interactions with the star that an entire website has been constructed to document such occurrences. He’s stuck with the extreme inconvenience of being recognized wherever he goes, but he seems to have found a way to turn his fame into a good deed, a gift of joy to others.

In the Netflix series, The Bill Murray Stories: Life Lessons Learned From a Mythical Man, an attempt is made to try to find out what motivates Murray to create memorable moments for strangers.  A 2014 interview with The Guardian may shed some light on where the comedian/actor is coming from.

Murray once again played the wild card, as he began talking about something few would have expected: His Catholic faith. Murray was raised in an Irish Catholic family. The middle child of nine — and the brother of a nun — he speaks of Catholicism with an intimacy and affection many Catholics will appreciate:

You don’t need to ask if his faith is important to him. He talks about how 19th-century candidates risk not getting canonized because the church is keen to push ahead with the likes of John Paul II and Mother Teresa. “I think they’re just trying to get current and hot,” he smiles.

One new saint he does approve of is Pope John XXIII (who died in 1963). “I’ll buy that one, he’s my guy; an extraordinary joyous Florentine who changed the order. I’m not sure all those changes were right. I tend to disagree with what they call the new mass. I think we lost something by losing the Latin. Now if you go to a Catholic mass even just in Harlem it can be in Spanish, it can be in Ethiopian, it can be in any number of languages. The shape of it, the pictures, are the same but the words aren’t the same.”

When asked if he thought hearing the Mass said in one’s own language is a good thing, he remarked “I guess,” and continued:

“But there’s a vibration to those words. If you’ve been in the business long enough you know what they mean anyway. And I really miss the music – the power of it, y’know? Yikes! Sacred music has an affect on your brain.” Instead, he says, we get “folk songs … top 40 stuff … oh, brother…”