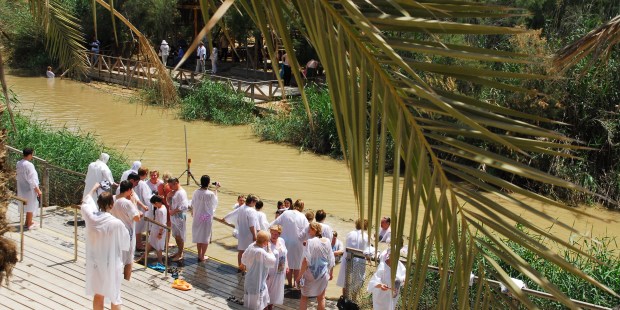 In Eastern Christianity, one of the most important feasts of the year is Theophany, when the faithful commemorate the Baptism of Christ by St. John the Baptist. Roughly equivalent to the feast of the Epiphany in the Western Church, Theophany occurs on the same date, January 6, or, for those following the Julian calendar, January 18 or 19.

One custom for many Eastern Christians is to take a dip or a swim in a nearby body of water, in commemoration of Christ’s baptism in the Jordan River.

Thus, what better place to celebrate the Theophany than in the Jordan itself? But since the 1967 Six Day War, such a practice has been complicated by geopolitics. The main site under Israeli control where tradition holds Jesus was baptized is known as Qaser al-Yahud. (An alternate site, Al-Maghtas or “Bethany-beyond-the-Jordan,” is located in the country of Jordan.)

Halo Trust, a British charity that has been working on demining efforts in former war zones around the world, estimated that landmines covered nearly 1 million square meters of land there, blocking access to to the Jordan and to eight historic churches.

This year, pilgrims visiting the site for Theophany found much greater access. Halo Trust says that the compounds of the Ethiopian Orthodox, Greek Orthodox, Franciscan and Russian Orthodox churches have all been cleared of booby traps and unexploded mortars, Church Times reported. The Franciscans recently held a service for the first time in 50 years. In addition, an Ethiopian Orthodox monk has announced plans to start living in his church, which he called an “incredibly spiritual and peaceful place.”

The National Catholic Reporter noted that although Israel declared peace with Jordan in 1995, the baptism site — in the often disputed West Bank territory — remained closed, strewn with landmines.

“In 2000, Israeli authorities cleared the landmines along a narrow access road leading to the baptismal site for the visit of Pope John Paul II. In 2011, authorities opened the road to pilgrims for the first time, allowing access to the river but not to the monasteries.

About 800,000 people came to the site in 2018, especially around the feast of the Epiphany, the Reporter said. “On their way, they passed the shuttered church buildings, yellow signs flapping in the wind bearing warnings about landmines.”

Despite more than two decades of peace between Israel and Jordan, removing the landmines required negotiations between an ever-shifting body of stakeholders: the Israeli Defense Ministry, the Israeli army, the Israeli Civil Administration that oversees administrative issues in the Palestinian territories, the Nature and Parks Authority, the Tourism Ministry, the Palestinian Authority, and other Palestinian and Christian groups. But most importantly, anything done in the Land of the Monasteries required the cooperation of all seven denominations of Christianity present: Catholic and Syrian, Greek, Russian, Romanian, Coptic and Ethiopian Orthodox churches.

Halo Trust, a U.K.-based de-mining group that operates in 27 countries and territories around the world, has led de-mining efforts in Israel and the Palestinian territories for the past eight years. According to the Wall Street Journal, there are approximately 35 square miles of land with mines in Israel and the West Bank, especially in the Golan Heights and along the borders. The Land of the Monasteries is about a third of a square mile.

Halo Trust spent years of negotiating with representatives from each Christian denomination, an effort that was also shared with Pope Francis. …

A team of 22 specialized bomb sappers from the country of Georgia, along with dozens of Palestinian support staff have cleared 1,500 landmines from three of the seven church compounds, officials announced in mid-December 2018.