See America by train for less than $200? Check it out 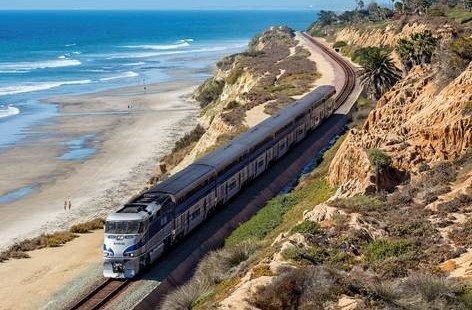 With a little planning and flexibility, an Amtrak cross-country trip can be a fulfilling experience.

An article or blog post that describes a cross-country scenic train trip for a couple hundred bucks is sure to get a lot of attention. Derek Low’s blog post certainly did. Low wrote about taking a four-day Amtrak trip from San Francisco to New York and being wowed by some of the most beautiful landscapes and geographical features found anywhere in the world. The price tag? $186.

Such a trip would be more fulfilling than seeing the country from 35,000 feet, but less stressful than driving a car coast to coast. The happy medium can be done economically—with a bit of planning.

Low made his journey in 2011, so prices have probably changed. But good deals are still possible, for people who have a little flexibility.

“The cost of a trip depends on various factors, on travel dates and length of trip, accommodations such as coach or roomette,” Amtrak spokeswoman Kimberly Woods said this week. “We also offer fare sales at different times of the year. These sales offer discounts for travel on many of our long distance, overnight trains.”

Low’s jaunt began in Emeryville, California, which is about 20 miles south of San Francisco. There he picked up the California Zephyr, which took him 2,438 miles to Chicago. On the way, he watched the landscape change from the San Francisco Bay to the Sierra Nevada.

The adventurous Low was not confined to his seat, of course. In fact, at one point, he discovered the train’s Sightseer Lounge car, which is fitted out with enormous windows that wrap upward into the ceiling.

“At Sacramento, an expert from the California State Railroad Museum came onboard to give live commentary of the scenery,” Low reported. “As we passed Donner Lake, he retold the story of the Donner Party who were stranded here in the winter of 1846. Some of the party of 87 resorted to cannibalism; only 48 survived.”

In Salt Lake City, he was able to get off the train and do a little sightseeing. Then, after traveling through the Rockies and reaching Denver, the train rolled through the Great Plains on its way to Chicago. There’s only so much gazing at flatlands one can do before feeling sleepy. One might wonder about the feasibility of sleeping on a train, particularly when you’re going cheap and you don’t want to spend extra for a sleeper. But Low assures readers that sleeping on board is “surprisingly comfortable.”

“The seats are spacious with plenty of legroom and they recline a good 40 degrees,” he wrote. “They’re more comfortable than economy class seats on planes.”

After Chicago, the traveler must change to the Lake Shore Limited to go the rest of the way to the East Coast.

“Traveling by train gives you a glimpse into the soul of America,” Low said. “The experience rewards you with far more stories and experiences and sights than you could ever witness alone in a car, eyes fixed on the road, or on a five-hour flight across the country.”

In spite of the attractive price Low put in his headline, he admitted at the end of his blog post that he paid a bit more so he could do the trip on a 15-day rail pass and had the freedom to go sightseeing in Denver, Chicago and other cities along the way.