The cosmic struggle between good and evil: Is it real? 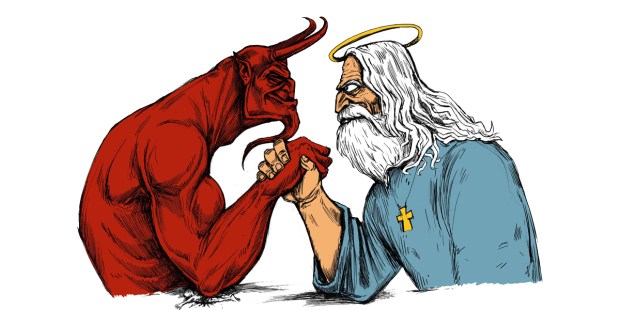 Humans have a deeply ingrained sense that the battle between good and evil exists, and that we ourselves are in the midst of this battle.

Fr. Robert Spitzer has discussed man’s awareness of a cosmic battle as one of the interior senses of God’s existence. He points to the work of psychiatrist Carl Jung, who suggested that the myth of a hero in the cosmic struggle between good and evil is not only a popular theme in literature, but it is present to all of us in our unconscious mind. Because it is so universal, many thinkers argue that its origin flows from the reality of God. Fr. Spitzer agrees and points to J.R.R. Tolkien’s words:

“We have come from God and inevitably the myths woven by us, though they contain error, reflect a splintered fragment of the true light, the eternal truth that is with God.”

Tolkien famously described the life of Jesus Christ as the one true myth. In a series of clips from an interview at the Magis Center, author and Tolkien expert Joseph Pearce reminds us that Jesus Himself used stories (parables) to teach us truths about God and ourselves, thus in a way, sanctifying stories as a way of conveying truth.

In terms of a cosmic battle between good and evil, there’s no moment more central in salvation history than Jesus sacrificing Himself on the cross to save all of humanity. That might be obvious to us now, but even when we look at the life of Christ in the Gospels, we find that Jesus took this aspect of his mission seriously.

His mission of salvation was to bring us the good news that God’s kingdom was at hand. His ministry of healing and exorcisms demonstrates clearly that this included delivering God’s people from the actual dominion of demonic forces.

An exorcist for every Catholic diocese

Even though Jesus definitively won the victory over Satan when He died and rose from the dead, this deliverance is still happening today.

In 2004, the pope instructed every Catholic diocese in the world to appoint an exorcist, a priest trained in delivering people from demonic influence or possession. This is how Fr. Gary Thomas found himself training in Rome as an exorcist. His experiences were the inspiration for the Hollywood film The Rite.

As Fr. Thomas witnessed, Satan is very much alive and operating effectively in the world. He warns us that anyone dabbling in the occult or in divining knowledge has the real potential to make contact with evil spirits.

The key to defeating Satan’s influence in our lives

The classic signs of possession—physical aversion to the sacred, unusual strength during exorcism, speaking unfamiliar languages, knowledge of hidden things, wild distortion of limbs or face, and uncontrollable movement—are very disturbing and very dramatic. Exorcism is needed specifically in these cases of possession. However, as Fr. Spitzer describes in this video, deliverance ministry can free a person from lower levels of demonic interference—obsession or possession. In day-to-day circumstances, turning to God in prayer, using holy water, holding a crucifix, or even simply invoking the name of Jesus can be powerful and sufficient.

The Accuser: The power of his lies

Satan’s most dangerous weapon, however—the one that doesn’t make it into Hollywood scripts—are the lies he tells us every day.

How many of us have wondered at a low point in our lives if God really loves us? Perhaps our suffering has made us wonder if He exists, or if, if He does, that we’re not good enough to be loved or He is keeping us from the things that would make us happy.

Read more:
Are you an “accuser?” Pope says that’s 1 of 3 ways to pour new wine into old wineskins

The best weapon against the Father of Lies

It’s the old story, the story of the Garden of Eden. Adam and Eve lost trust in the goodness of God. The battle between good and evil in the lives of each of us began there, but it does not end there!

The best weapon against the Father of Lies is the truth: that God is full of mercy and compassion like the father in the parable of the Prodigal son; that we are made in the image of God and have infinite dignity and value; that we are loved beyond reason, beyond our wildest imagining!

When we have a relationship with Jesus and trust in His word, not only are we able to reject Satan’s lies, but we join in Christ’s mission to liberate others from those lies and truly bring God’s kingdom into the world.

Read more:
A prayer to protect your family from the devil