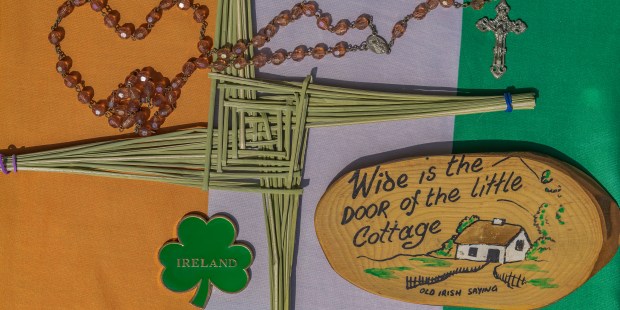 A popular Irish custom has a rich spiritual history behind it.

February 1 is the feast day of St. Brigid of Ireland, an influential saint of the fifth century. It is said that she had a close relationship with St. Patrick and helped him build up a firm foundation for the Christian Church in Ireland.

One story from her life eventually led to the popular Irish custom of the St. Brigid cross. It is said that St. Brigid was called to the deathbed of an old pagan chieftain. He was suffering greatly and those around him believed Brigid could bring him peace. She arrived at his bedside and tried to console him with her words. While he was still restless, Brigid picked up a few rushes that were spread on the floor and began to weave a cross.

The chieftain was interested in the cross and began to ask her questions about it. Brigid explained to him the life of Jesus Christ and his death on the cross. This greatly consoled him and brought peace to his soul. He subsequently converted to the Christian faith and was baptized before he died.

Ever since, Christians in Ireland have made crosses out of straw or rushes and placed the cross on their doorways after getting them blessed by the parish priest. It is believed that the cross will protect the home from evil spirits, fire, and hunger.

This belief reflects the spiritual power of the cross, as it is similarly stated in this ancient blessing of a cross found in the Roman Ritual.

Lord Jesus Christ, bless + this cross by which you snatched the world from Satan’s grasp, and on which you overcame by your suffering the tempter to sin, who rejoiced in the first man’s fall in eating of the forbidden tree. May this cross be hallowed in the name of the Father, + and of the Son, + and of the Holy + Spirit; and may all who kneel and pray before this cross in honor of our Lord find health in body and soul; through Christ our Lord.

The weaving of the St. Brigid’s cross is a beautiful tradition, one that is hinged on the saving action performed by Jesus Christ on Mount Calvary.