Why you need to watch ‘Groundhog Day’ … again 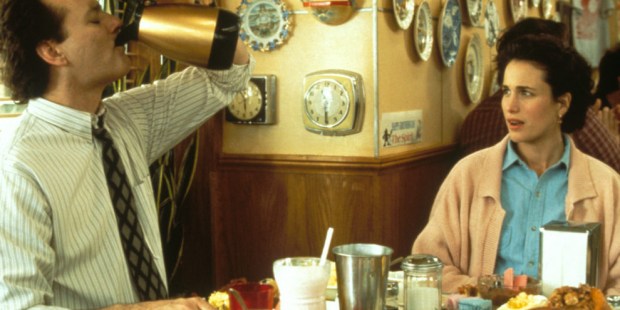 Sermons, lectures and philosophical treatises have been devoted to the movie.

Here we are again – it’s February 2, time for the annual reminder that you really should watch the movie Groundhog Day, because, maybe you weren’t paying attention the first time you saw it, but it’s DEEP. And according to Michael P. Foley, professor of patristics at Baylor University, deeply Catholic.

In an article Foley wrote for Touchstone Magazine, he suggests  that “Groundhog Day may be seen for what it is: a stunning allegory of moral, intellectual, and even religious excellence in the face of postmodern decay, a sort of Christian-Aristotelian Pilgrim’s Progress for those lost in the contemporary cosmos.”

But Catholics are not the only ones to seek truth in Groundhog Day. Check out Jonah Goldberg’s wonderful 2006 essay on the movie’s deep spiritual and philosophical meaning:

“In the years since its release the film has been taken up by Jews, Catholics, Evangelicals, Hindus, Buddhists, Wiccans, and followers of the oppressed Chinese Falun Gong movement. Meanwhile, the internet brims with weighty philosophical treatises on the deep Platonist, Aristotelian, and existentialist themes providing the skin and bones beneath the film’s clown makeup. On National Review Online’s group blog, The Corner, I asked readers to send in their views on the film. Over 200 e-mails later I had learned that countless professors use it to teach ethics and a host of philosophical approaches. Several pastors sent me excerpts from sermons in which Groundhog Day was the central metaphor. And dozens of committed Christians of all denominations related that it was one of their most cherished movies.”

So, decidedly not a just a vehicle for a madcap Bill Murray. Watch it now. Streaming on various platforms.