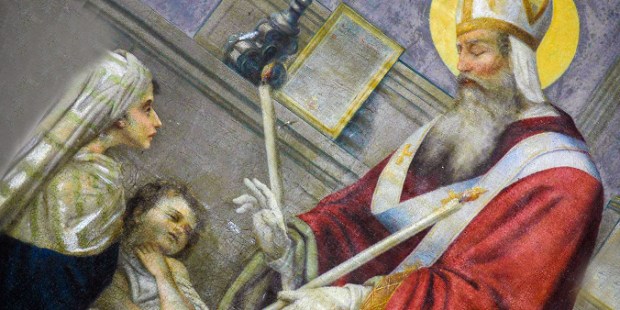 I’ve never forgotten to urge others to ask St. Blaise to jump in

Years ago on a pilgrimage, my mother and I spent a day in the seaside city of Dubrovnik, Croatia.

The beautiful walled city has honored St. Blaise as its patron since the year 971, when he reportedly appeared to residents to warn them of a coming attack. Gates at the city’s entrance are adorned with a statue of the saint, and the cathedral holds his relics.

Blaise was a beloved bishop of the 4th century who encouraged the spiritual health of his people. Although the Edict of Toleration (311) granted freedom of worship in the Roman Empire, persecution was still common throughout the area. Blaise felt a call to live in seclusion, and fled to the mountains where he lived as a hermit, making friends with wild animals. A group of hunters seeking wild animals for the amphitheater discovered Blaise’s cave, where they were astounded to find the bishop kneeling in prayer surrounded by peaceful wolves, lions, and bears.

According to one version of the legend, as the hunters took Blaise off to prison for practicing Christianity, they came upon a desperate mother with her young child, begging for help because the boy had a fish bone lodged in his throat. Blaise prayed over the boy, and he immediately coughed up the bone.

Other miracles were attributed to him but the persecution of the region didn’t let up. The governor of Cappadocia tried to persuade Blaise to sacrifice to pagan idols, but Blaise refused and was beaten for it. The next time he refused, he was hung from a tree and his flesh torn with iron combs. Finally in 316 he was martyred by beheading.

Over the years I’d had my throat blessed once or twice but never knew how St. Blaise came to be the patron of throat illnesses until I toured Dubrovnik.

The dramatic story popped into my head a few years ago, when my father was in the hospital with an infection that brought on a stroke. His swallowing was affected and he was unable to eat, swallow, or talk. He had a feeding tube and every day a “swallowing specialist” would come to assess whether his swallowing had improved enough for him to try some soft food. Day after day there was no improvement and my father’s saliva was constantly suctioned. The feeding tube brought on other problems and his condition deteriorated.

With his medical crisis centered around his throat, I suddenly thought of St. Blaise. Maybe it was a nudge from the bishop himself. I only know that I thought, “this is the saint for the job,” and moved him to the top of my list of heavenly intercessors. I started asking for St. Blaise’s help right then and there.

I told my dad about this new reason for hope and he smiled and mouthed, “great idea!” I’m sure he sent up a few prayers to the good saint too.

The next afternoon my father started speaking. In order to speak, he had to take the saliva suction tube out of his mouth, and that’s when he realized he was swallowing normally again. Best of all, when the doctor came around to assess his swallowing again that evening, she said he could start back on regular food — no more feeding tube!

Read more:
What happens when a Lourdes miracle isn’t a healing, but is still miraculous?

My dad looked at me and said, “That was our friend, St. Blaise for sure!” I’ve never forgotten to urge others to ask St. Blaise to jump in when there’s any issue related to the throat.

St. Blaise’s feast day, February 3, often includes the blessing of the throats, with priests holding two blessed candles on either side of the neck while invoking the intercession of St. Blaise.

St. Blaise,
gracious benefactor of mankind
and faithful servant of God,
who for the love of our Savior
did suffer so many tortures with patience and resignation;
I invoke thy powerful intercession.
Preserve me from all evils of soul and body.
Because of thy great merits God endowed thee
with the special grace to help
those that suffer from ills of the throat;
relieve and preserve me from them,
so that I may always be able to fulfill my duties,
and with the aid of God’s grace perform good works.
I invoke thy help as special physician of souls,
that I may confess my sins sincerely
in the holy sacrament of Penance
and obtain there forgiveness.
I recommend to thy merciful intercession
also those who unfortunately concealed a sin in confession.
Obtain for them the grace to accuse themselves sincerely
and contritely of the sin they concealed,
of the sacrilegious confessions
and communions they made,
and of all the sins they committed since then,
so that they may receive pardon,
the grace of God,
and the remission of the eternal punishment.
Amen.