A trick for making the saints come alive 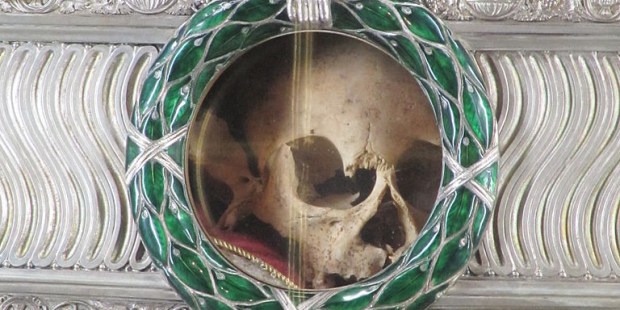 Suddenly they aren’t stories anymore but dear friends, older brothers and sisters in the faith who are praying and cheering for me.

By most standards, I’ve had rather a gruesome month. I’ve seen disembodied arms, severed skulls, and quite a few full corpses, all on display in what might strike many as macabre scenes: body parts encased in precious metals and surrounded by flickering candles as dozens of individuals murmur ritualized words in dark chapels.

For a Catholic (especially one in Europe), it’s nothing out of the ordinary. Every European church of any standing has a saint enshrined within, sometimes half a dozen. And while many of the saints have been left intact and concealed beneath an altar, others have been divided among several locations, their heels or tongues or hands framed in gold and exhibited on side altars the world over for the edification of the faithful.

Those of us who grew up outside Europe (where even the tiniest village may well boast the remains of a great saint) often find this sort of spectacle off-putting to say the least. Why desecrate a corpse so that others can ogle it, we wonder. Worse still, why hack it to pieces and disperse it across Christendom? Aren’t we commanded to bury the dead? Then shouldn’t they stay buried?

Aesthetic sensibilities aside (because I’m not sure I’ll ever find a bedazzled skeleton beautiful, no matter how elaborate its garments), there’s something entirely natural about the desire to visit and honor the dead. It’s a part of many cultures, and even those who don’t celebrate Dia de los Muertos or hold jesa ceremonies may be inclined to visit deceased friends’ and relatives’ graves on birthdays or death anniversaries. In a sense, we visit the remains of the saints in the same way: to be close to those we love.

But the saints have more people who love them than the average grandmother, and their devotees are likely only to increase in number as the years go by. So the Church has made it possible for friends of St. Francis Xavier, for example, to visit him in Goa, India, as well as Rome, Italy. And by touching a rosary or holy card to his remains, the faithful can have a third-class relic of their very own, a reminder of their saint friend to keep close to them even after they leave the presence of the body.

Of course, God can work miracles through relics. He did in biblical times (Acts 19:12) and he does today. But my experience of relics hasn’t been one of miraculous healing or conversion (though the stacks of no-longer-needed crutches left behind at various shrines makes it clear that such miracles aren’t as unusual as we might think). For me, the experience has been much more ordinary.

I’ve heard about many saints. I’ve read and researched and written. But most of the stories I’ve read remain just that: stories. Unless the personality or struggles or conversion of a particular saint really grab me, it’s hard to see these brothers and sisters of mine as anything other than friends of a friend.

When I go visit them in the flesh (so to speak), that changes. Not always. Many of the saints whose remains I’ve venerated remain nothing more than a name, an icon, an anecdote. But others feel so close, somehow, as though I’ve gone from hearing about them to finally meeting them. Saints whose basilicas I stopped by purely out of geographical convenience or because I was with a friend who loved them suddenly weren’t stories anymore but dear friends, older brothers and sisters in the faith who are praying and cheering for me, weeping when I fall and rejoicing when I repent.

Read more:
Overwhelmed by struggles? Don’t forget this incredible communion is praying for you!

This, ultimately, is the idea behind relics: not lucky charms or magical talismans but encounters with people who love us and whose love brings us closer to the Father. Their bodies may be dead but their souls are abundantly alive. As we spend time with their remains, we remember that our bodies will one day be as theirs now are—may our souls, too, imitate theirs and find themselves in the embrace of the Triune God. And may we take our place alongside them as models, intercessors, and friends of those who follow after us.

This week, ask your pastor if there are relics at your parish — churches with fixed altars usually have at least an altar stone containing a relic — and ask if you can venerate them (by kissing, touching, or just praying in front of them). Do some research into any saints who might be buried nearby or find out if there are any local churches that have interesting collections of relics. Then make a visit and ask the saints there represented to pray for you. You may find that you, too, learn to love them (and, thus, the Lord) better when you visit them in person.

Read more:
Pilgrimage to history: Family traces paths of forebears in the Church