An American in Panama: Finding the Body of Christ at World Youth Day

"Throughout the trip, I continuously and truly noticed God in the people I met."

Last week I joined a group of nearly 30 students and teachers from my school on a faith-filled pilgrimage called World Youth Day—also known as WYD, a week-long spiritual awakening that occurs every three years in a different city around the world. This year, Panama City generously hosted the celebrations. Young people from almost every country you can think of flocked to Panama City to meet other Catholics, listen to knowledgeable speakers, and celebrate the Holy Sacrifice of the Mass. 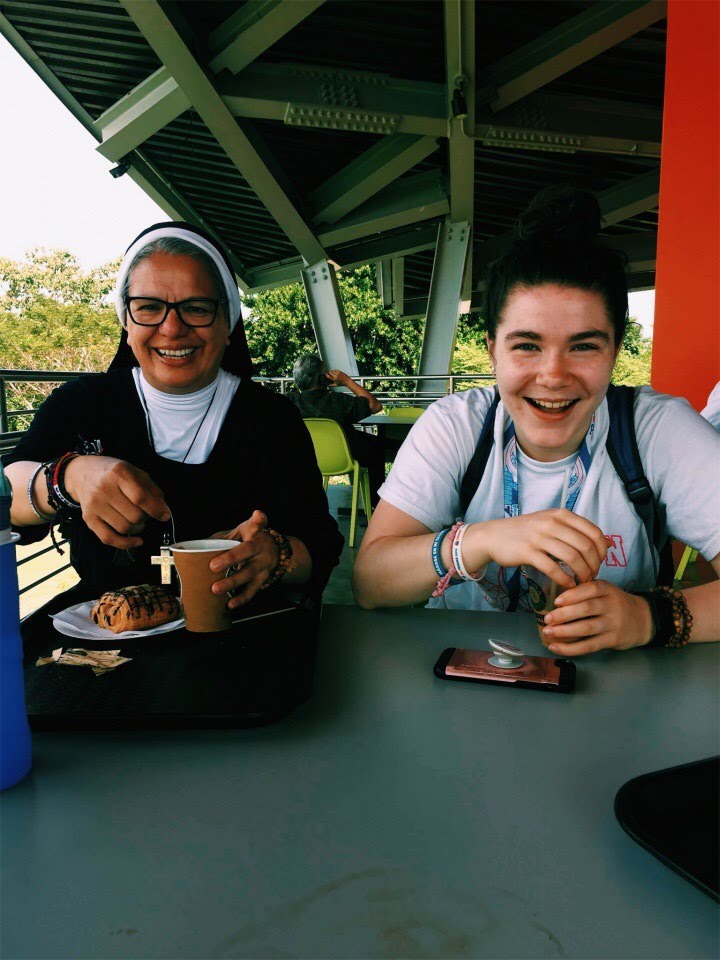 When we arrived in Panama, my group—from Georgetown Visitation Preparatory School in Washington, D.C.—were surprised to have so many cars honking at us. At first I thought the Panamanians must have been angry at us for causing such bad traffic and for taking over the city, but these turned out to be gestures of welcome. In fact, every single Panamanian I met over the course of the following week, whether Catholic or not, modeled the Salesian virtues of hospitality and gratitude.

One thing that struck me throughout the trip was how similar many of the other young people and I were to each other, despite our geographic differences. We bonded over how similar our childhoods and schools are, even though we originally imagined ourselves so different. Because our common Catholic faith united us, nothing, not even a language barrier, could truly separate us. Admittedly, popular culture placed a part in this: I was surprised when two girls from Mexico made a reference to a Hannah Montana show I had watched years ago.

Throughout the trip, I continuously and truly noticed God in the people I met. I saw God in the welcoming Panamanians who hosed down the pilgrims on hot days. I saw God in our chaperones who sacrificed a good night’s sleep to stay up with one of my friends when she was sick. I even saw God in the woman who, at 5:55 a.m., woke us up after an overnight vigil. Using a blaring loudspeaker, she yelled “Buenos días!”

World Youth Day is nicknamed the Catholic Coachella—and it really feels like a festival, with surging crowds of pilgrims singing, dancing, and laughing. I left World Youth Day not only with a newfound appreciation for Christian rock, but also for the Eucharist and Adoration. Did I mention celebrity sightings? Not only did I get to hear Bishop Barron deliver a speech, I saw Pope Francis drive by in the Popemobile.

Lately, it seems like the Church is under attack from all sides. But our faith is ever new, and ever renewed. The press may condemn and attack, but, as usual, the real story is elsewhere—like the fact that every three years, hundreds of thousands of young people from around the world gather in prayer to meet the Holy Father and each other. Time to start planning for WYD 2022 in Lisbon!