A trip to Olvera Street: The heart of Los Angeles’ Mexican heritage

It is home to Los Angeles' oldest building as well as its very first Catholic church.

Visitors to Los Angeles who want to immerse themselves in the city’s rich Mexican heritage head to Olvera Street, the downtown neighborhood considered to be “the birthplace of Los Angeles.” While the many souvenir shops and roving mariachi bands strike some as touristy, the busy marketplace is steeped in history. 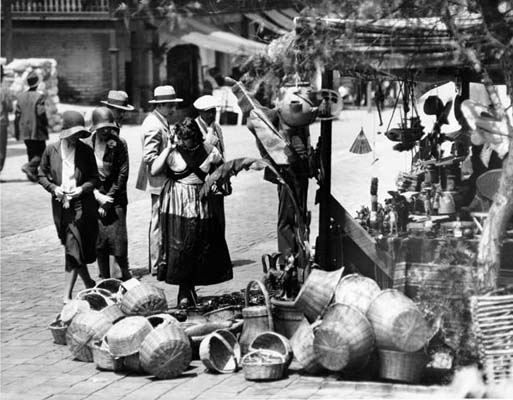 The first inhabitants of modern day Los Angeles were people belonging to the Gabrieleno/Tongva tribes, who called this patch of land “Yang-na.” But in 1781, King Carlos the III of Spain ordered the installation of a Spanish outpost in the region, calling it El Pueblo de Nuestra Senora la Reina de Los Ángeles de Porciúncula” (literally “The village of Our Lady Queen of the Angels of the Little Portion” — named by the Franciscan padres who accompanied the settlers for St. Francis’ tiny church in Assisi). Initially, a group of just 11 families occupied a small area near the Porciúncula River, later renamed the Los Angeles River. Over the next few decades the group expanded, and in 1822, the pueblo became part of the newly established Mexican territory after Mexico won its independence from Spain. By then, they had also built what still stands as Los Angeles’ first Catholic church, also named Our Lady Queen of Angels, in the main plaza. (Today the church is familiarly known as La Placita for its location.)

The group slowly established a farming community and named streets according to produce being sold, one of the most important streets was called “wine street,” for example. In 1848 the buzzing town of Los Angeles (shortened from its original name) was purchased by the United States from Mexico as part of the Treaty of Guadalupe Hidalgo. The town kept expanding, attracting new settlers from the south of the United States. Wine Street became the pulsating heart of a farming and cattle market where many different cultures mixed and matched. In 1877 its name was changed to “Olvera Street” in honor of Agustin Olvera, the first Superior Court Judge of Los Angeles County, who lived in a house on this street.

Over the next century, Los Angeles turned from a small village to one of California’s biggest cities, attracting an influx of migrants from within the United States as well as Mexico, Sicily and China. But urban expansion came with plans to do away with its most ancient part, Olvera Street. When in 1926 Christine Sterling, a woman from northern California who moved to Los Angeles, found out that the city’s government was planning to demolish the Avila Adobe, a villa built in 1818 by Spanish soldier Cornelio Olvera that today stands as L.A.’s most ancient building, she campaigned to protect the heart of Los Angeles’s origins. Sterling approached the Chamber of Commerce and the publisher of Los Angeles Times and they decided that “Olvera Street” was to be preserved and turned into a marketplace and cultural center where the city’s Mexican roots could be celebrated.

Today, its tree-shaded alleys are home to a vibrant open-air Mexican style market offering visitors the chance to take a trip in the past. It is estimated that as many as two million people from all over the world pay a visit to this ancient street every year.

Make sure to visit this cultural heritage spot while visiting L.A., or if you live in the area. You can spend a day sorting through artisanal crafts from pottery to Mexican folk art, all while listening to mariachi and snacking on delicious tacos. Christmas — with the Las Posadas candlelight festivities — and All Souls Day (El Dia de los Muertos) are two favorite holiday times. And don’t forget to pay a visit to Los Angeles’ first Catholic church, Our Lady Queen of Angels, which today is part of  the Archdiocese of Los Angeles and offers Mass in Spanish and English. The large and imposing modern cathedral of the Archdiocese is not far away, and shares the name Our Lady of the Angels.

And for those who are curious to learn more about Olvera Street’s history, don’t forget to sign up for a 50-minute guided tour offered by “Las Angelitas del Pueblo” every Tuesday through Saturday, 10 a.m., 11 a.m. and noon. To reserve a guided tour, call: (213) 628-1274.